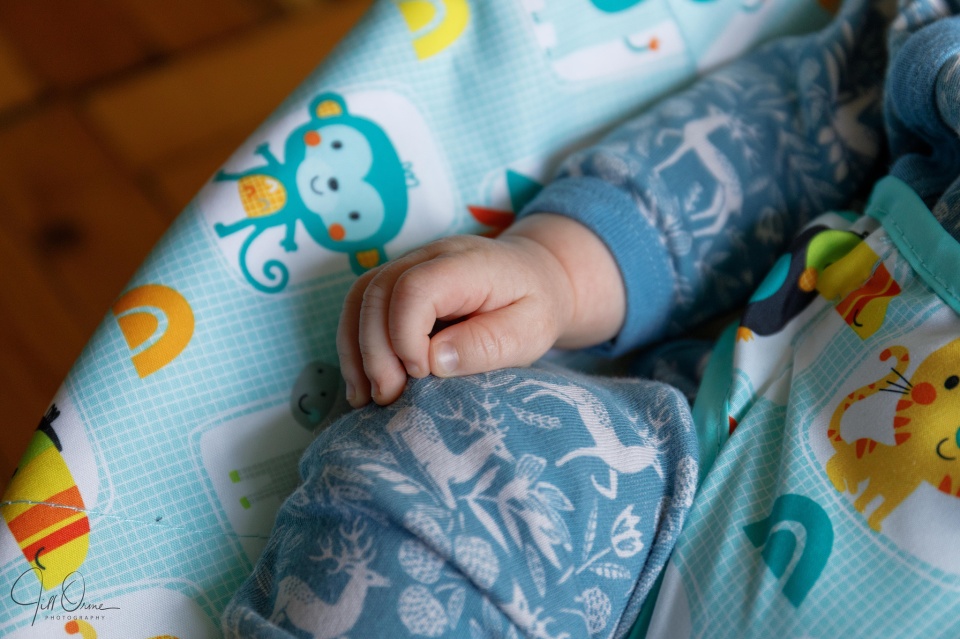 Baby B was a little fragile today, on account of having received his first vaccinations yesterday, but he still managed to produce quite a few smiles for us, and did excellent chatting. He needed quite a bit of comfort and reassurance though (as his grandfather did after his two most recent vaccinations, to be fair), and as it was another stormy day we thought it best to forego our walk and keep him in the warmth and security of home.

I think he’s now begun to realise that his hands and feet belong to him: while sitting in his new bouncy chair today he spent quite a while intently watching his feet as he was moving them around, and appeared very interested in them. He also seems to be getting the hang of the opposable thumb – he kept pinching the fabric of his babygro between thumb and forefinger, and every now and then would take hold of a label he’d found that’s sewn into the side seam – but in between times he would rest his hand on his knee in a gesture that reminded me rather sweetly of my grandfather. He wasn’t interested in trying to hold a small furry toy I offered him, but I think that stage is probably imminent.

I was touched that L put him in this garment again today – I don’t know if she has an actual spreadsheet, like Buckingham Palace, to remind her who gave him which gifts, but she’s certainly punctilious about showing the donors that they’re being used. But I noticed when I re-poppered it after a nappy change that it’s getting a tad tight, and I suspect this may be its last appearance in his photo album.