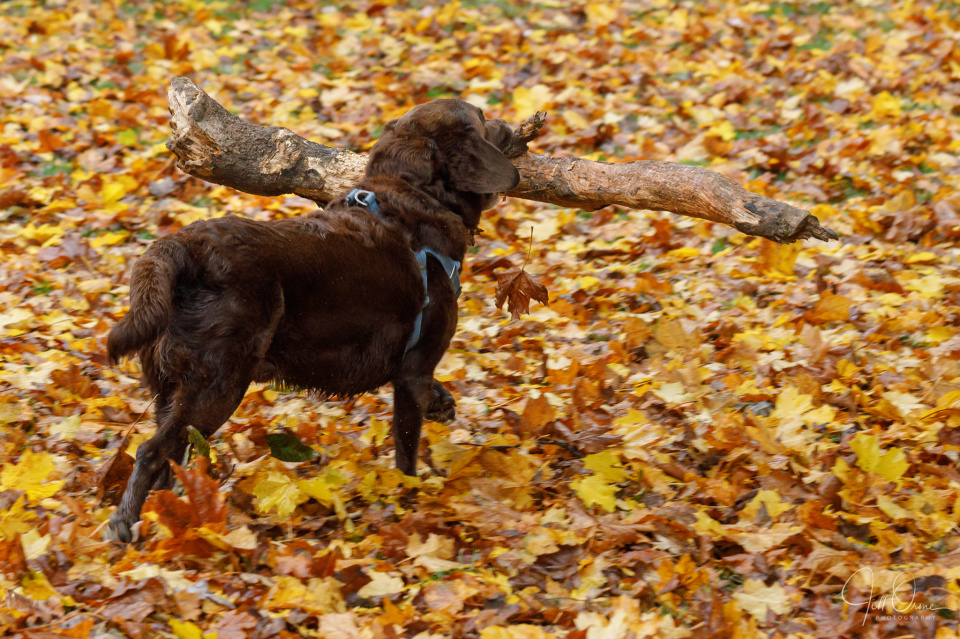 R and I were walking Baby B around an extremely dank park this morning, and I had the camera set up for still subjects in poor light, when this labrador, which had been barking plaintively at its retreating owner for some while in a desperate attempt to get some help with The Best Stick in the World, finally and suddenly realised that it was going to have to help itself, hoisted the stick, and cantered off. The project had looked impossible, and I still can’t quite believe it happened, so I was taken by surprise, and by the time I’d dialled in even a reasonable shutter speed the dog was past me and away in pursuit of its human. Nonetheless, and despite the movement blur, I quite like this, because it shows the size of the stick – which I think we can all agree was actually a fairly substantial branch.

Despite it being so wet – it wasn’t actually raining, but the air was so full of water that it was settling out on every available surface – we had a pleasant walk. R and I had coffee and (amazing) chocolate cookies from the local bakery, and Baby B was happy and engaged with everything he was seeing, just so long as we fed him a constant supply of rice snacks: over the course of about three quarters of an hour, he got through 3 carrot puffs, 3 corn rings and 2 raspberry and blueberry rice cakes, and would have accepted more if they’d been on offer. 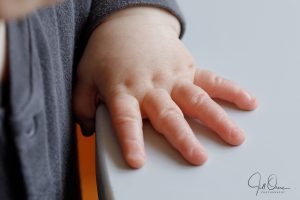 R said that if I decided to blip the dog this evening I should also post the extra, which he sweetly described as the perfect baby starfish hand photo. I don’t know about that, but I do love those knuckle dimples. I’ve been missing my parents this evening, just because I know they’d have adored The Boy, and the combination of that, and autumn, and it being the end of a long day, completely undid me when this song came on my iPod this evening.