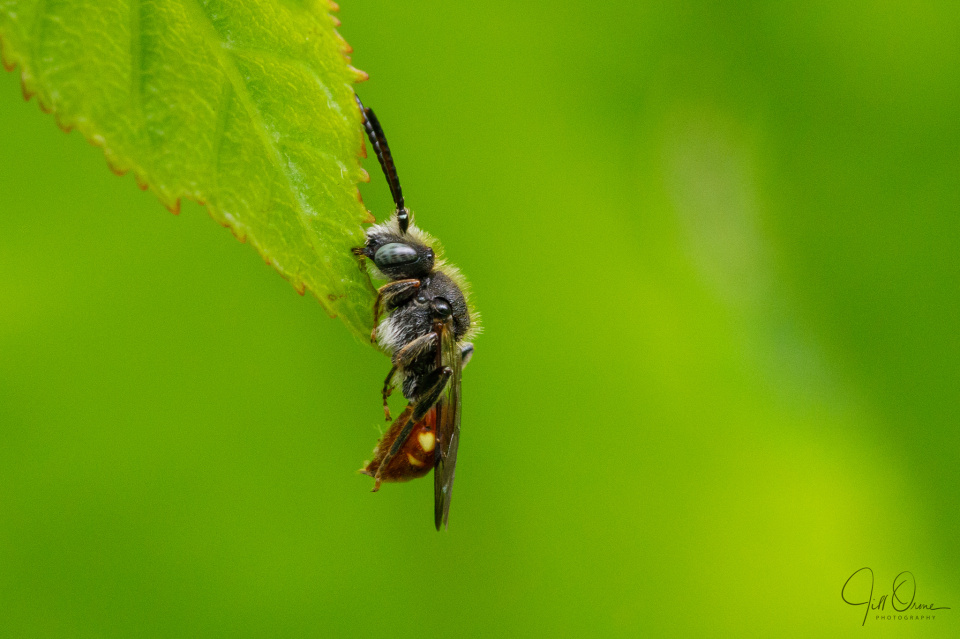 I was rummaging around the furthest section of the wild garden this morning when I spotted something on the end of a leaf of the red chestnut tree, and went to investigate. It was slightly above my eye line, so I had to pull down the shoot to see what it was, but it was very small, and even though I was wearing my glasses it still took me a few seconds of peering to decide that it was a nomad bee.

Because it was entirely still and unresponsive to the movement I was causing in the leaf, my first thought was that it was dead. After a few seconds though, it began to move its antennae, and then to vaguely wave its legs around – but it still wasn’t moving off the end of the leaf, and I began to wonder if it was caught there by some kind of sticky substance. Eventually I intervened (yes, I know – shoot me), and provided it with a twig to get hold of. It promptly grabbed the twig, let go of the leaf, and then threw itself off the twig into space and disappeared, leaving me somewhat bemused. I quickly forgot it though, and carried on with my day.

After spending the afternoon gardening (eeeurgh), and making kedgeree for dinner (delicious), I finally got to sit down and look at today’s photos, and the mystery resolved itself. Firstly, it was a nomad – specifically, a male Nomada fabriciana, identifiable by the combination of yellow spots on a largely red abdomen, black antennae with a very tiny red mark at the tip, and bifid or forked mandibles. And secondly, the reason for his unusually floppy posture, and the odd stillness I’d first noticed, was that he was asleep, with everything relaxed except for those forked mandibles, by which he’d anchored himself to the edge of the leaf.

To be honest, I’m quite embarrassed about this incident now. In my defence I’d never seen a nomad sleeping before, but I fairly regularly come across bumblebees snoozing on flowers, as well as the occasional mining bee stacking zeds on a leaf or a plant stem, and I did rather think that I could recognise a sleeping bee when I tripped over one, and that I had better manners than to wake it up. But if the telling of this tale causes some other poor bee that’s just hanging around, minding its own business, to be spared the rude awakening that this little guy had to endure, then I won’t have publicly mortified myself for nothing.

There’s information about Nomada fabriciana here and here, if you’d like to know more.