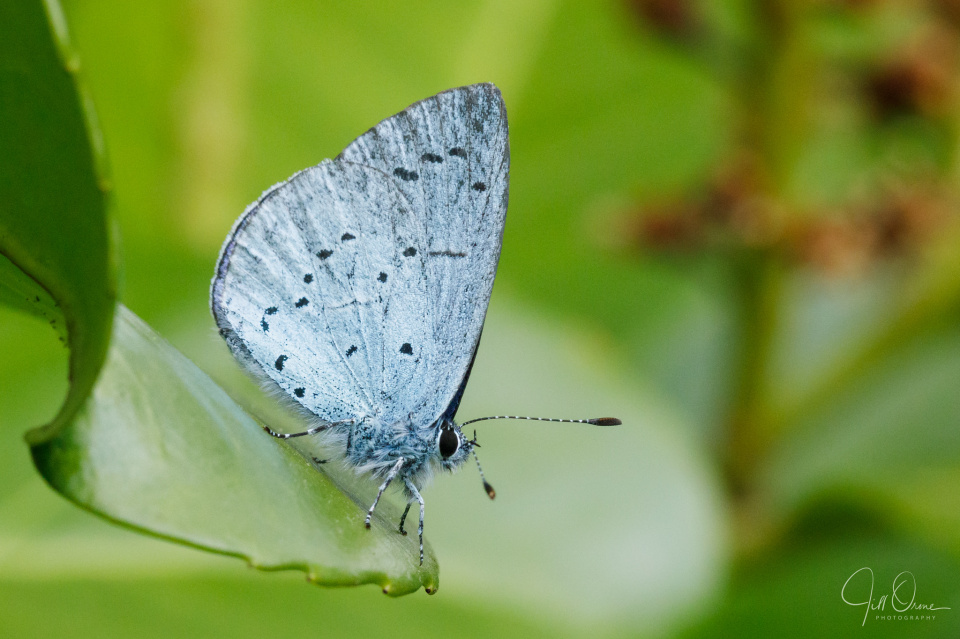 While I was chasing mining bees and conopids along the laurel hedge in the secret garden this morning, at least three Holly Blues whizzed through at regular intervals – I can record three, because that’s the number of different individuals I managed to catch on camera, but I suspect there were actually more. One of the best-known facts about the Holly Blue is that its numbers fluctuate quite widely from year to year, possibly due to to parasitism by the wasp Listrodomus nycthemerus, whose only host it is, but it looks to me as though this will be one of its good years.

Getting photos of this butterfly isn’t especially easy because both sexes tend to fly high, and the males are on almost constant patrol in search of females, but today I was lucky: I caught a female feeding quite low down on the laurel, and two different males paused and rested for a while at about my head height. This was the calmer of the two males, possibly because he’s already a little worn and tired. He let me walk right up to him without reacting at all, and only flew away when he was bombed by an ashy mining bee – sadly, this was just as I was lining up an absolutely parallel shot of his wings after getting onto a hop-up step, so the bee found himself on the receiving end of some quite fierce invective. The fact that the butterfly’s wing isn’t sharp front to back is annoying, but I do like his delicately extended right forefoot – it looks to me as though he’s getting ready to dance, and on seeing the photo a friend of mine commented “Regency dandy!”. 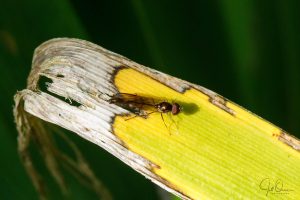 My extra tonight shows a male Baccha elongata, whose weirdly elongated abdomen surely makes it the strangest hoverfly we have in the UK. Yesterday I found a female in almost the same place, which was exciting because I’d never seen one before, but she was not prepared to pose and I only managed blurry record shots, so I was very pleased that today’s male was more cooperative. This is a woodland species that likes dappled shade and lush vegetation, especially nettle beds, so our wild garden is perfect territory for it. The hoverfly bible says that though it’s widespread and common, it’s inconspicuous and often overlooked, so it may be a species that’s only new to being noticed by me, rather than new to the garden, but I’m choosing to count it as a beneficiary of my current style of gardening, which I like to think of as ‘managed neglect’.