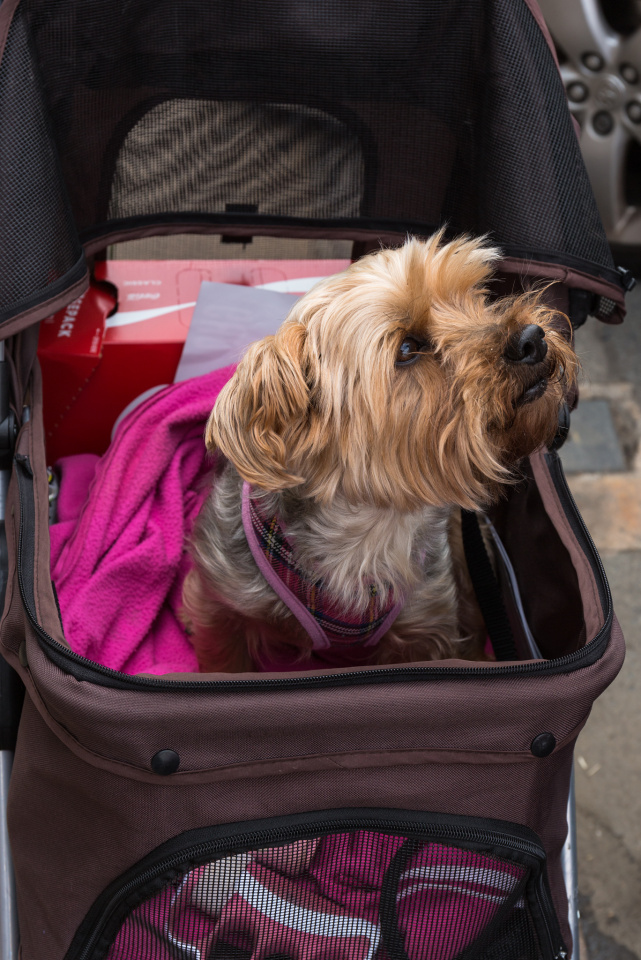 “Oh yes – she can. But if she rides in here we can take her into shops.  We’re here on our holidays – aren’t we Fudge?”

“What’s the best thing about Fudge?”

“The best thing…. well, it’s like having a third child, really. She’s eight, so she’s not a baby, but I suppose we do treat her like one. We have a boat, and she has her own seat in the front, so she can see where we’re going. You’re spoilt, aren’t you?”

First thing this morning a UPS van pulled up outside the house and delivered the 5D back into my quivering hands. The first thing I did was to put its memory cards back into it and lift off the photos I’d been taking with the Big Lens when it broke – 85 bird feeder shots, which I then spent the morning processing. I also called the repairers and asked about the suggestion that the problem might have been due to a lens fault, but I can’t say that the conversation clarified anything. When I told the chap that I’d used the lens on the 70D since the 5D died, and had also had it checked over at LCE, he said “Oh well, it probably wasn’t that then,” and when I asked what it probably [i]was[/i] in that case, he said airily that “Sometimes they just take it into their heads to break.”

This afternoon R and I went into Stratford to collect the repaired PC from Logical Computers, and I took the 5D to try it out around town. I’d taken several shots before I realised that all wasn’t well, and had momentary heart failure until common sense kicked in and I realised that replacing the main circuitry would – of course – have restored it to factory defaults. R was quite impressed that I could manage to sit in a coffee shop, with a latte in one hand and a cake fork in the other, while programming in all my custom settings with no access to a manual – and all the while keeping up a constant flow of low-level invective. I rather doubt that the people at the next table were equally entertained.

Once I’d beaten the camera back into shape I went for a brisk walk and rattled off about three dozen shots – and having uploaded and checked them this evening I’m cautiously satisfied. I was using the 24-70, which is a very forgiving lens, but the only focusing glitches were clearly down to user rather than camera error.

I’ve also reconstructed the PC this evening, dealt with a mountain of back emails, applied some updates and am now running the second of two scans. Tomorrow I need to do accounts – so that’s something to look forward to – and devise an action plan for doubling up all critical software and data on the Mac. It’s all deeply boring, but it needs to be done before the PC hits its next crisis, which (given its age) could easily prove terminal.

I’m now so far adrift on responding to your many kind comments on my recent blips that I don’t know how I’ll ever get myself straight – so in case I don’t may I just say here how thrilled I’ve been, especially by your response to the Fallow Boys and the Leaf-cutter bee. Thank you!