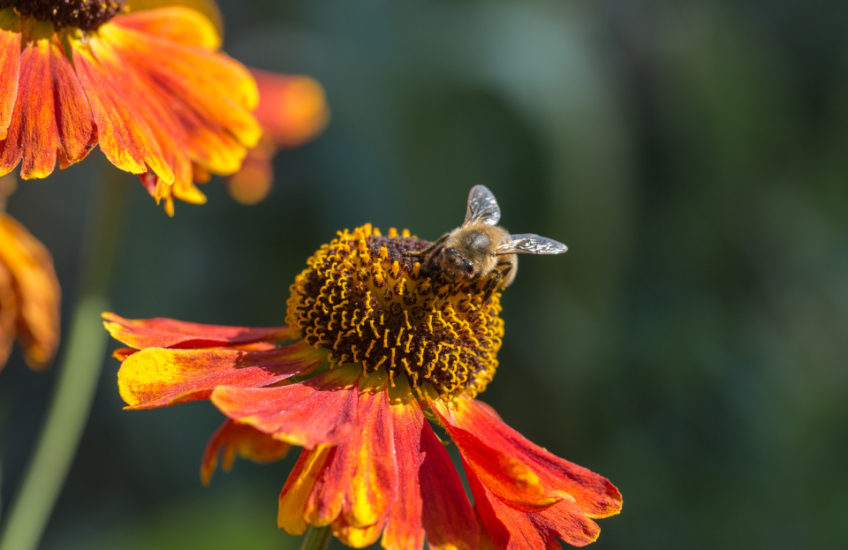 In these unsettled and troubling times, it’s good to know that there are still some things on which you can rely. For example: trying to take macro photographs in a high wind will always be a bad idea, leading to bitterness and recrimination, a full memory card and a strong desire for a sit-down and a piece of cake.

I spent most of the day doing admin-type stuff, trying to catch up the time I lost earlier in the week to a broken computer, and it was quite late in the afternoon when I was finally able to start looking for something to photograph. The light was harsh and contrasty, it was very windy, and the bugs were skittish: in the end I resorted to burst shooting, but anyone viewing the results without having witnessed the shoot would probably have concluded that I’d never used a camera before. Or was drunk. Or both.

Luckily this little honeybee came to the rescue by spending several minutes browsing the heads of my Helenium ‘Sahin’s Early Flowerer’, which is short enough to have been somewhat protected from the wind by the garden wall. I do have much closer shots of her, but R and I both liked the negative space in this one, which gives a calming contrast to the mad reds and yellows of the sneezeweed.

As I was writing this blip R called me downstairs to see THE BIGGEST HOUSE SPIDER EVER IN THE WORLD. EVER. I’m not joking – if the flash had charged in time for me to photograph it I’d have entered it into the Alternative Olympic Games for sure, because it was definitely lifting weights, and I’m pretty certain it was off its face on steroids. Of course, I’d have needed something in the photo for scale, which might have been a problem – there’s no way that R would have volunteered to have his hand in shot, in case it took off one of his fingers.

Anyway, sadly the flash batteries are a bit low, and by the time the unit was charged it had run away somewhere. It probably thought we were there to drug test it.

Which just leaves the question….. where has it gone…………?

Sleep well, blipmates. I will be sitting up in bed all night with the lights on and a 12-bore shotgun next to me, in case it decides to pay a visit to the bedroom.