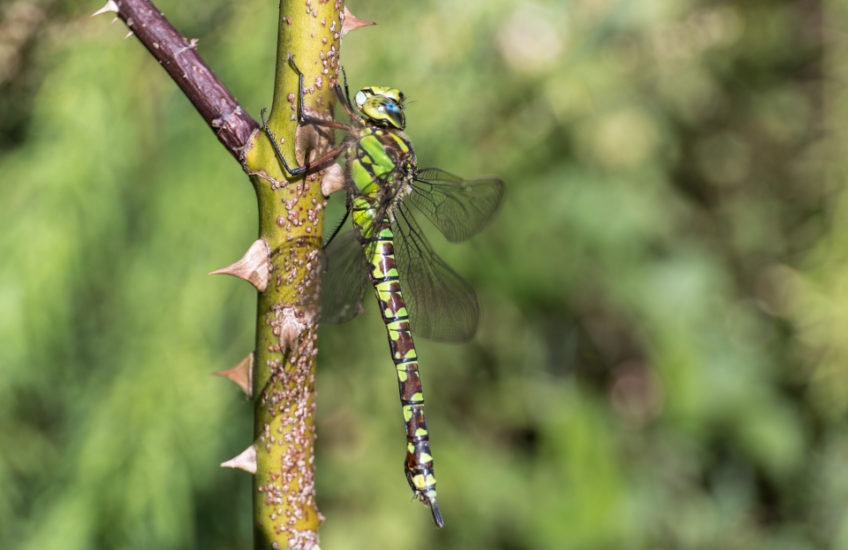 Aeshna cyanea, the Southern Hawker, came a very creditable second in her heat of the 30 Minute Photographer Evasion Stakes at the AOG, being snapped only at the 28th minute when she came momentarily to rest on a rose bush. Her success was all the more remarkable in that she’s missing half of one foreleg; but although this qualifies her for the APOG she has elected to compete with the able-bodied Hawkers instead. We expect great things of her in the next round, especially if she can keep up the punishing training schedule which also delivers her a constant supply of winged protein between now and the semi-finals. Let’s hope for more sunny weather for her!

I’m becoming slightly obsessed with dragonflies – I’m not entirely sure why, because viewed with a sentimental eye their habits are reprehensible. I’ve seen some quite awful photos of dragons biting appalled-looking damselflies in half, and ripping the wings off butterflies before contentedly chowing down on them. On the other hand, they do at least do their own dirty work: I eat meat but I’m not prepared to kill it myself, so I don’t really have any right to criticise.

I’ve been aware for the past couple of weeks that there were dragons around the village, but hadn’t managed to photograph any of them until today, when I was setting up the garden sprinkler and spotted this one doing hunting circuits. I actually thought I’d missed my chance again because the camera was in the house, so I just watched her until she came to rest, and then rushed in to fetch it – coming out just in time to see her disappear over a hedge. I waited for a few minutes, but it seemed that she wasn’t coming back, and I was standing chatting to R about something else when I sensed a movement as she flew past me, and turned in time to see her land on this rose stem.

We’d been in Stratford earlier and I had my walkabout 24-70 on the 5D – not an ideal lens for bug shots, but it does have a switch that converts it to a semi-macro. I took a set of shots at 70mm, while approaching as slowly and stealthily as a solid woman in baggy summer trousers can reasonably approach a dragonfly through a well-stocked and underplanted rose bed, and then flipped the macro switch and got in closer still while burst shooting. From 48 images there were only three I thought were keepers – but in the circumstances that’s not bad. I’ve put in one of the others as an extra. 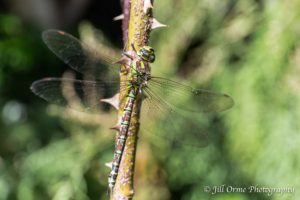 And yes, I do know that the rose needs pruning. Believe me, it looks far worse in the third photo.

In other news, I finally got round to processing my images of Charlecote Park, and I’ve put an album here.