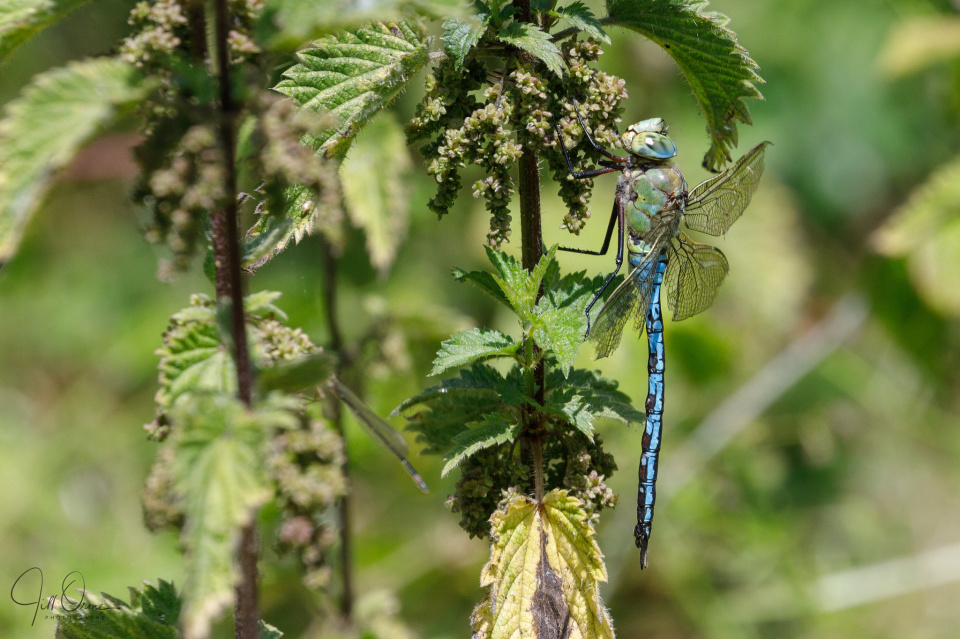 Emperors are Britain’s largest dragonflies, with an abdominal length of 5 to 6 cm, and the males are highly territorial and aggressive. They don’t just fight each other: they will attack other dragonflies too, and are capable of eating smaller ones up to the size of a Four-spotted Chaser. I particularly noticed at Lower Moor Reserve today that whenever an Emperor appeared at the lake, the relatively small Black-tailed Skimmers all disappeared into the trees, only re-emerging when the bigger dragon had moved on.

A male Emperor that’s in good condition can seem to be in almost perpetual motion; they fly high, fast, and erratically over their territory, and rarely seem to perch, unless they’ve caught something that’s too big to be eaten on the move. Because of that they’re not easy to photograph, and I’ve never yet managed an Emperor portrait that I’m proud of. When I saw this one today in a glade at Whelford Pools, I was immediately suspicious of the fact that he kept perching – but when I saw the state of his wings, all became clear. He’s lost about half of the left forewing, and quite a lot of the hindwing too, and both right wings are also badly torn. Though you can’t see it in this photo, he’s also missing the last section of his left middle leg, which suggests violence rather than simple wear and tear, and overall he looks as though he’s been on the losing side of a serious battle.

Even while taking this photo I felt quite sad that I was able to get so close to him – in his prime he certainly wouldn’t have allowed it, but today, rather than taking off and making the leap into hyperspace, he quietly edged around to the other side of the nettle, trying to get out of my eye line. It seems inevitable that he’ll be predated soon. 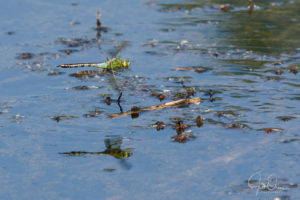 So as not to depress us all too much, I’ve included as an extra a shot that I took at Lower Moor, of a handsome female Emperor flying between oviposition sites. It’s the Circle of Life, innit.