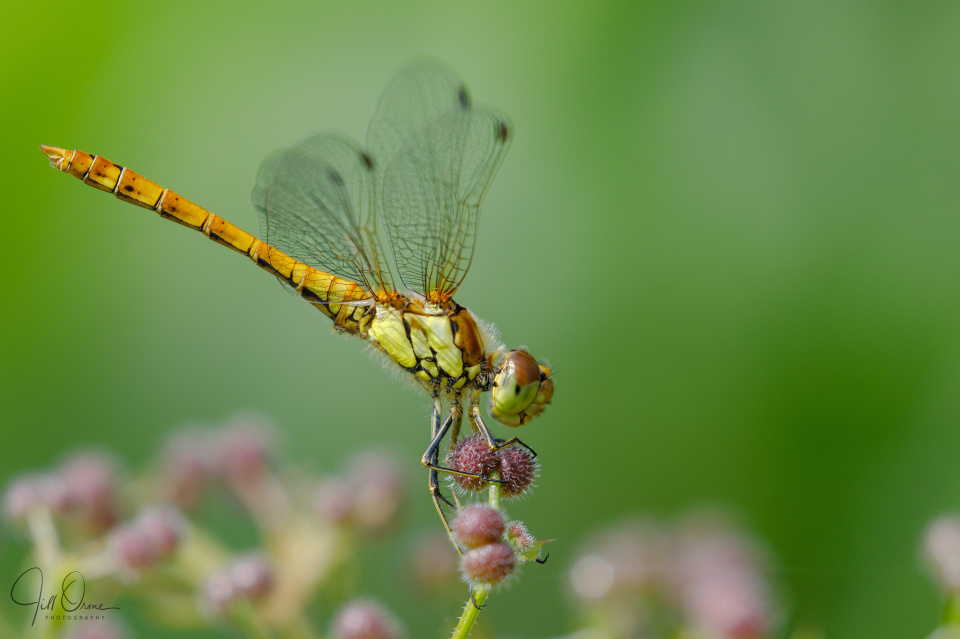 I paid a visit to my dentist this morning, receiving a smiley face badge for having a nice set of wedding photos on my phone, but losing it again for poor attendance: ever since my canine tooth was excavated, internally and externally, a few months ago, I find that I’m averse to the attentions of people equipped with sharp metal implements. She’s a star though, Mrs K, and we rapidly agreed on a course of action that works for both of us, allowing me to skip rather than flounce out of the surgery.

R and I then went over to Charlecote for coffee and a walk. There was surprisingly little fallow deer activity around the park, but lots of dragon stuff going on at both the lake and the river, and plenty of grasshoppers pinging around the rides. My nicest capture of the morning involves grasshoppers, but not necessarily in a good way: a small bird was hopping about in one of the reed beds at the lake, and when I managed to get focus on it, turned out to be a female reed bunting with her beak absolutely stuffed with grasshoppers. I’ve put three shots of her here, if you’d care to take a look.

Back at home I went for another walk, in the hope of finding a Southern Hawker (which I did), and then on my way back through Tilly’s field I spotted this Common Darter, and became so engrossed in trying to get good shots of it that I totally lost track of time, and came home much later than I’d intended and with scores of images to cull and process. A combination of the issues arising from using a very large lens on a very small insect, the CD’s skittishness, and the busyness of this patch of weeds, led to a very high failure rate, and most of the files wound up in the trash – but out of the handful I’ve kept I am quite pleased with this one.

In working up my photos I’ve realised that I owe the dragon a bit of an apology: because of its colouring I jumped to the conclusion that it was a female, and addressed it as such, but having seen all its bits and pieces on a large screen I think it’s an immature male. Over the next few days his abdomen will turn red, the centre one of the three panels on the side of his abdomen will darken to brown, and his eyes will also darken. The posture he’s adopted here is known as a “modified obelisk” stance, and is used by dragons that perch for prolonged periods to slow down the rise in their body temperature when the sun is shining on them; there’s a Wikipedia page about it here, if you’d like to know more.