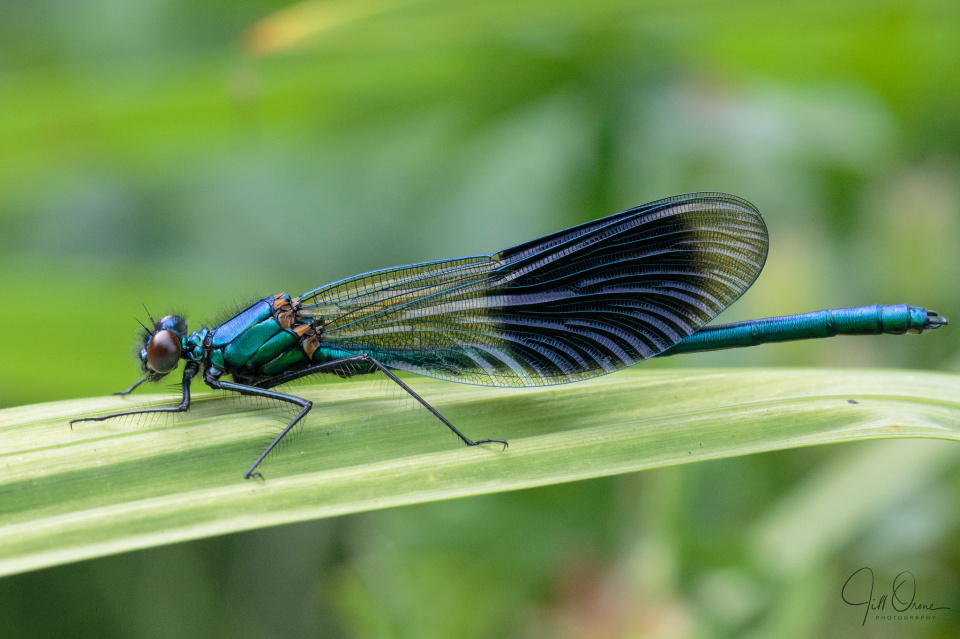 Yes, I know: it’s another Banded Demoiselle. But I only kept five photos from today, and three of them were of this handsome  young chap. And pretty soon they’ll be gone, and then you’ll have months of me photographing my dinner, and whining about winter weather and no Odonata – which would you rather?

So anyway, I kept three photos of my new garden friend here, but that’s out of around forty that I took, because I had the very devil of a job getting him in focus front, middle and back. I don’t pride myself on much, but I do think I’m a reasonably good macro photographer, and I don’t need to be told that when you’re working close in with a macro lens the depth of field is wafer thin, so you need to get the front element of the lens as parallel as possible to your subject. Which, luckily, isn’t all that hard when they have straight bodies, although you do have to factor in the thorax being a bit bulgy, and of course the head on one of these is a rather extreme shape too. My solution is to use f/11, focus on the side of the thorax, adjust the angle of the camera until the head and anal appendages both look sharp in the viewfinder, and let the middle take care of itself. This sounds a bit hit and miss, but I can’t be faffing around with tripods and gimbal heads when I’m stalking insects, and, given a relatively calm subject and a relatively calm day, it works.

With Mr C. splendens here, though, I wound up with a trash bin full of shots in which either the head was OK and the bum was OK but the thorax and wings were bizarrely soft, or the thorax and bum looked good but the head and wings were out of focus, or the head, thorax, wings, and top end of the abdomen looked fine, but the anal appendages were blurred. The only explanation I can come up with is that he was flexing his abdomen slightly from side to side – possibly because he’s extremely fresh (shown by the fact that his eyes are still a dull red, and his wings slightly soft), and he hasn’t yet got used to living in this new body.

It was maybe bad luck for him to have met a photographer so early on, when he was a bit dozy and not very fast – though, on the plus side, I didn’t scoop him up and eat him, and he did get his own back by spoiling most of my photos. In the end he decided that enough was enough, and removed himself to some cover, deeper in the flower bed, where I left him to get on with the important business of working out how to live his new life.