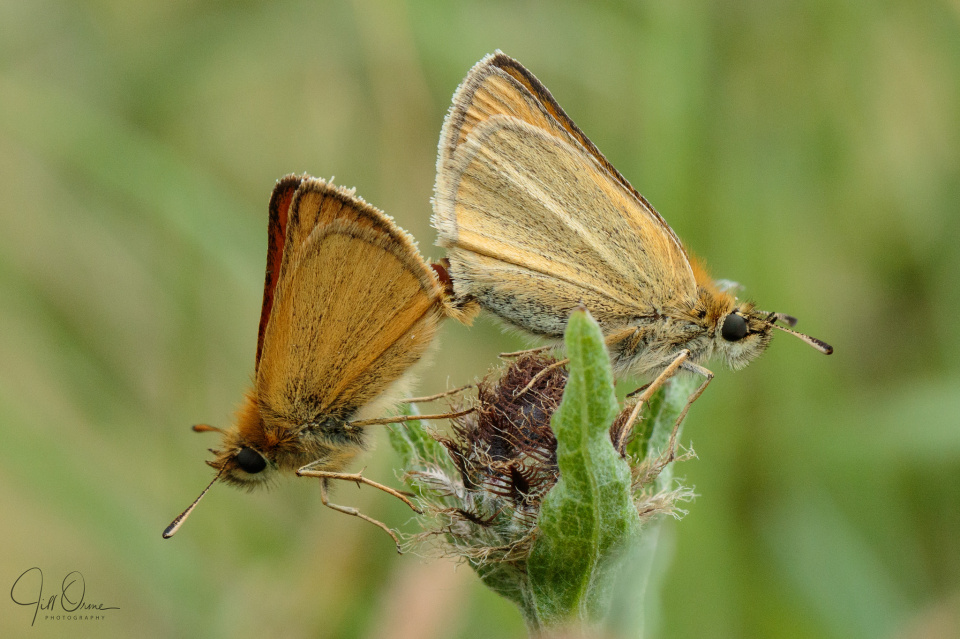 Me: “Well, look at you two! Those antennae look as though the ends have been dipped in ink, so you must be – “

Male Essex Skipper (huffily decoupling): “Having a private moment – or so we thought.”

Me: “Soz about that. Please don’t mind me, go back to what you were doing, and I’ll just take a few photos of you both… Oh! He’s gone….”

In truth, I don’t think I interrupted their coitus – conjoined pairs of butterflies relocate when they’re disturbed, so I must have arrived just as they were finishing. I haven’t been able to find any information about how long mating tends to last between Essex Skippers, but I’d be surprised if it’s a lengthy process because the male (on the left here) looked to have a pretty short attention span. As soon as he left this knapweed head he went into overdrive, zooming around the meadow and bouncing on and off other flower heads, but never seeming to settle anywhere for more than a split second. The female, by contrast, stayed exactly where she was, allowing me to get right in with the macro for some close portraits; I’m not sure she even realised he’d gone.

I took this, and my second favourite shot of a female Marbled White, during a quick visit to Tilly’s field early this evening. I’d spent most of the afternoon gardening (eeeurgh), and though I’d kept a camera to hand while I was working, nothing much had inspired me, so I was glad to find some photogenic butterflies during my walk. One rather curious thing did happen in the garden though: following my encounter with some wool carder bees at Hidcote a couple of weeks ago, I ordered some stachys plants, and today, while I was standing in the back garden trying to decide where to plant them, a wool carder bee flew in and landed on the lawn by my feet. We’ve lived in this house for eighteen years, and I’ve been recording insects around the village for the past five of those, and I have never seen one of these bees here before – in fact, I hadn’t ever seen one before that Sunday morning at Hidcote. I said in that blip that you can attract wool carder bees by planting stachys, but I didn’t expect to see one before I’d even got the plants in the ground!