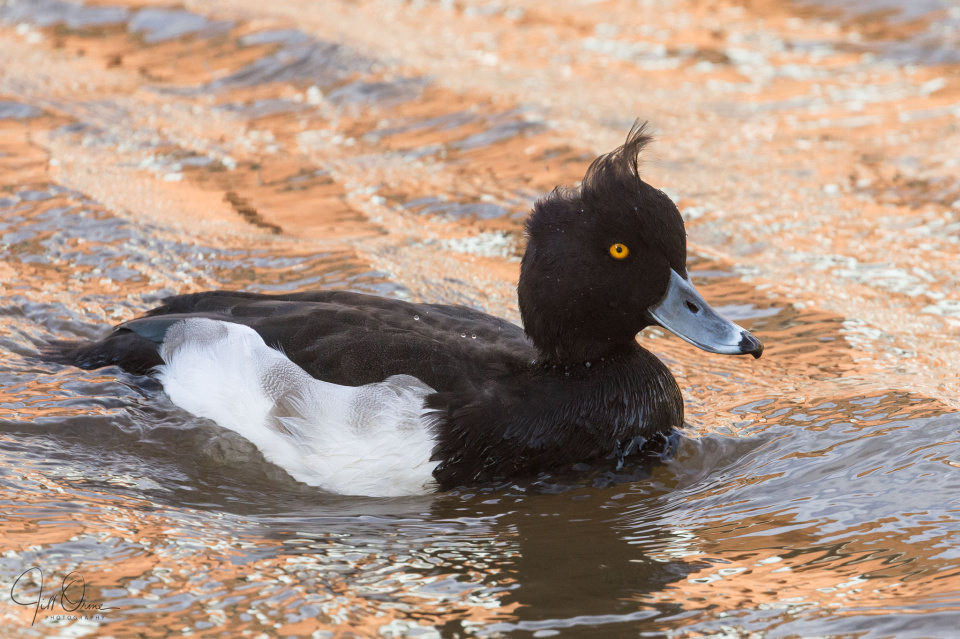 After the heavy rain of the weekend we were treated to a cold but sparkling morning, and Baby B graciously consented to allow R and me to take him to Stratford, for coffee and cake (us) and water and apple rice cake (him) in the park, and a walk along the river to see the birds. We had a very nice time, and it felt quite special to be introducing him to a new experience. The drive home was…. circuitous, because B needed a nap and took his time about going off to sleep, but he managed it in the end, and I can report that Gloucestershire was looking beautiful in the autumn sunshine too. B and L went off back to Cardiff this afternoon, where I’m sure that G was delighted to welcome them both home, after which R and I collapsed in an exhausted but happy heap.

There was good and bad news on the bird front in Stratford. I was pleased to see that there are still at least thirteen tufted ducks on the river by the theatre, but on a much less happy note, avian flu is back in town. I knew this already, because over the weekend I’d seen a post by the swan warden in a local on line forum, as well as one from the Vale Wildlife Hospital, who’ve had to close their doors to new water fowl admissions to protect their current patients. But we bumped into the swan warden on the Old Tramway Bridge today and I stopped to commiserate with him about the situation, and he told me that the carefully wrapped parcel on the back of his bike was another dead swan he’d just collected, which was very sad indeed.

Because Stratford is a tourist town and its swans are very well known, I tend to think that the water birds here are probably pretty well fed during the summer – there are a couple of places close to the river that sell packs of ‘swan pellets’, and you see a lot of these being thrown into the river, especially by children. But it’s colder now and there are fewer tourists around, and the water birds already seem hungrier than they were a couple of months ago, and it seems logical to me that any that become undernourished will be more susceptible to disease. So today I brought some swan pellets into town with me from home, and threw them in the water opposite the theatre as a small contribution towards keeping the Stratford birds fit and well.

In the process I confirmed a suspicion I’ve had for a while about tufted ducks, which is that whatever the books say about their diet consisting solely of aquatic insects, plants and molluscs, these tough and resourceful little ducks are also very partial to swan pellets. They will take them from the surface if none of the bigger and more aggressive fowl are close, but if there’s a mêlée on the surface of the water they simply dive underneath it – where presumably they’re able to hoover up any pellets that sink.