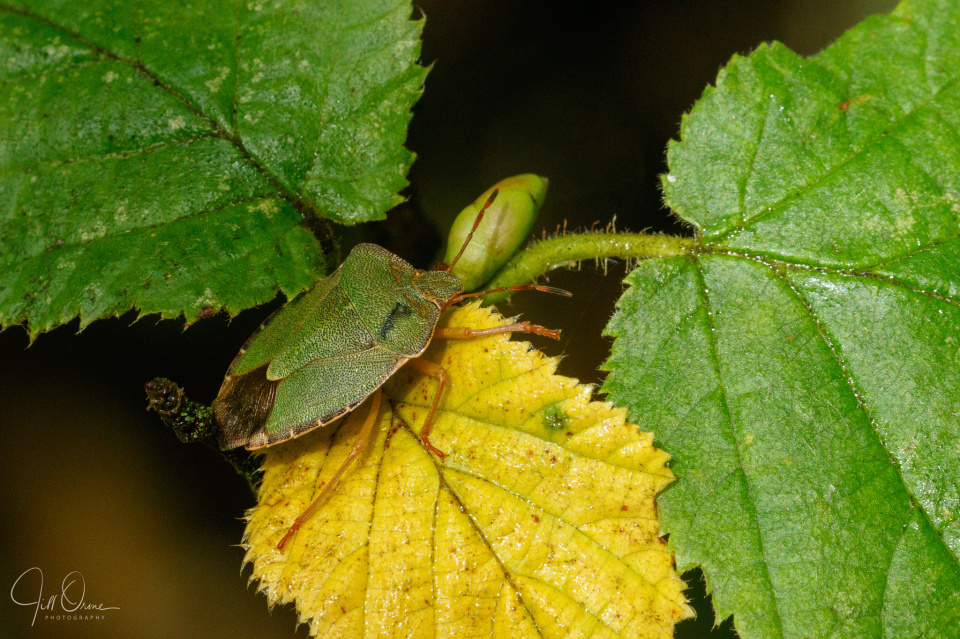 The other day R declared himself to be a member of the Shieldbug Appreciation Society. Which was:

a) very gratifying; and

b) just as well, because they’re the about the most abundant, and certainly the most photogenic thing I’m finding in the garden at the moment.

When I got up this morning it was still dark – not because I’d forgotten that the clocks changed overnight (I had, but my bedside clock is radio-controlled and automatically adjusts itself), but because it was absolutely teeming down, and the valley was buried under thick rain cloud. I was dubious that I’d ever be able to leave the house again, but mid way through the morning the rain stopped and the sky cleared, so I grabbed the camera and rushed off down the garden. By the time I photographed this rather spooked green shieldbug, maybe half an hour later, the weather was closing in again, and by the time I was back in the kitchen, making lunch, it was sheeting down. R and I did manage a mid-afternoon walk with Baby B, but although it stayed (more or less) dry, it was fiercely cold, and I envied him the thick pram duvet underneath which he was snuggled up and snoozing.

B and his mother have continued to be delightful house guests today, though The Boy ate so many roast potatoes at lunch time that we ran out, so he may not be as admiring of my skills as a hostess. “Do ten month old babies eat roast potatoes?” I can hear you asking. Why, yes. Yes, they do. New potatoes (unsalted), roasted in their skins in sunflower oil. Absolutely delicious, apparently. Broccoli, asparagus, mashed parsnip, and sautéed courgette… maybe not quite so much. But if he prefers carbs to everything else he’s only taking after me, so I’m not really in any position to lecture, am I?