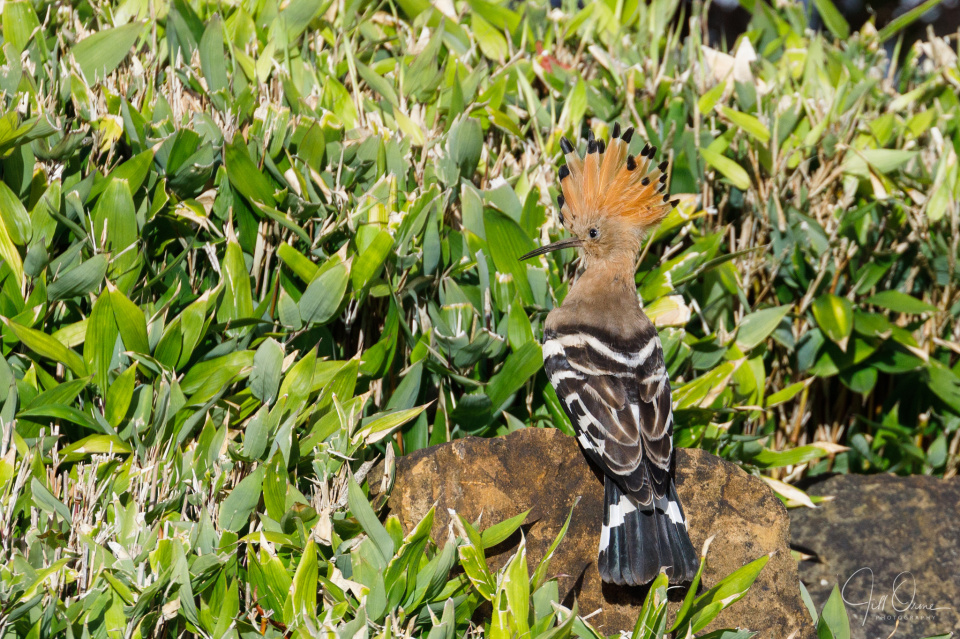 A few years ago I spent two hot and cross hours trailing around Claverdon in Warwickshire after a hoopoe that was alleged to have been seen there that morning. All I found were some bemused locals who had no idea what I was talking about, and one other photographer who was there on the same fool’s errand. The bird was never reported again, and I’ve been leaving hoopoes strictly alone ever since.

But. There’s been a reputedly very obliging individual hanging around on an industrial estate in Warwick for the past two weeks, and this morning I decided that as I was probably the only person in the Midlands who hadn’t yet photographed it, I probably ought to swing over there and take a look. I’m happy to tell you that I wasn’t disappointed by the experience – in fact I can see why some people find these odd but rather wonderful birds addictive, and rush around the country to see them whenever one gets blown off course while migrating, and ends up somewhere in the UK.

It’s not a very big bird – bigger than a great spotted woodpecker, but smaller than a green – but looks much bigger when it fluffs up its feathers and raises its crest. The colours on this individual are a little muddy, which has made seasoned hoopoe watchers suggest that its probably a juvenile, but as this is the first one I’ve ever seen, I can’t really offer an opinion. It’s certainly not a shy bird – in fact, it’s what birders like to call ‘confiding’, which is code for ‘not bothered about humans’ – though it does show some stress when large birds such as corvids are flying overhead.

It has spent the past fortnight expertly digging leatherjackets and cockchafer grubs out of an untidy patch of lawn outside an empty office block, but on today’s evidence there’s no danger of it running out of food any time soon: when I arrived it was sitting in an untidy heap, digesting the morning’s prey, but it soon went back to work and caught at least ten more large grubs before I left. When it stopped hunting, flew to this bamboo screen, and landed on one of the ornamental rocks, someone behind me said, “Oh good!”, because apparently this is its preferred place to display – which is what it’s doing in this photo. It’s not at all clear to me why it would want to display, given that there are no other hoopoes in the vicinity, but it’s clearly a settled behaviour pattern. I was told that the arrival of a wagtail quite often triggers it, though I hadn’t seen one today.

I’ve put a selection of photos over on my Facebook page, if you’d care to see more. If the photo of the larva toss had been just a little better focused it would have been my blip, but even a 1/1000 second exposure wasn’t quite fast enough to completely freeze the hoopoe’s head movement, sadly. I’m happy to have captured this moment though, and pleased (and quite amused) that it doesn’t look as though it was happening on an industrial estate in Warwick.