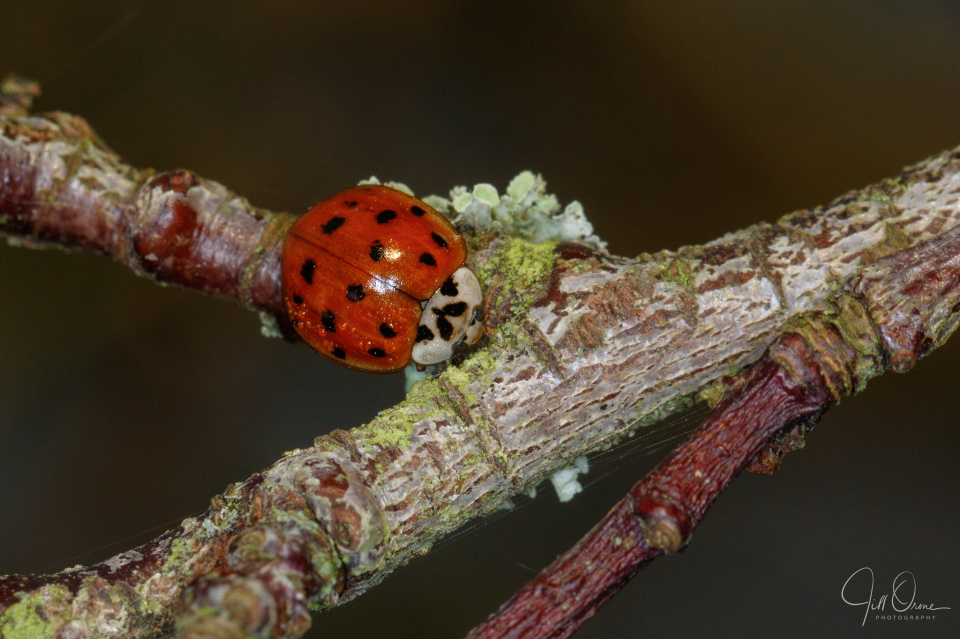 I was scuttling back to the house to avoid the rain that was just starting when I spotted this ladybird on a twig of the cherry plum in the top garden. This was only intended to be a record shot – if I’d thought it was going to turn out to be my favourite photo of the day I’d have put more effort into trying to get both the ladybird and the lichen behind it in focus – but when I saw it on a big screen there was something about the combination of lines, textures and colours that I found really pleasing. I hope you like it too.

This is, of course, a harlequin ladybird, but interestingly it seems to be mimicking a native ten-spot. Even though this is a rather exposed place for it to be roosting, I have to say that it’s displaying more wit than the ones that keep turning up in the kitchen in search of somewhere to hibernate: it’s too warm in the house for them to stay in diapause, and there’s nothing for them to eat when they wake up, so they just end up dying. If I’m in a charitable mood I collect them up and boot them back out to the wild garden, where at least some of them might manage to find a more appropriate winter shelter.

This was the second harlequin I’d seen today that momentarily lifted my spirits, until I looked more closely and realised what it was. While I was checking the birch catkin bug roost I found what looked like a pine ladybird snuggled up with some of them – but which again turned out to be a mimic. While it was a little disappointing not to be able to record a new ladybird species in the garden, I can’t bring myself to get too agitated about the foreign “invaders”, because here at least they don’t seem to be posing any great threat to the native species, which continue to be far more abundant. By the way, the birch catkin roost is continuing to expand, with over fifty bugs now clustering around the photinia buds. 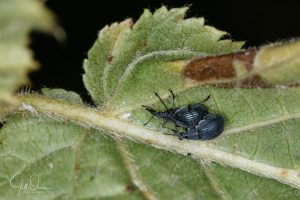 Tonight’s extra is a pair of my favourite weevils, snuggling together on the underside of a hazel leaf. The comparative lengths of their snouts shows that this is a mixed pair – the individual nearer the leaf is a female, and the one nearer the camera is a male. Lest you think there’s anything untoward going on here though, I can assure you that there isn’t – they’ve been in exactly this position since I first saw them three days ago. The first person to say the words “tantric sex” will find themselves in lunchtime detention for the rest of the week.