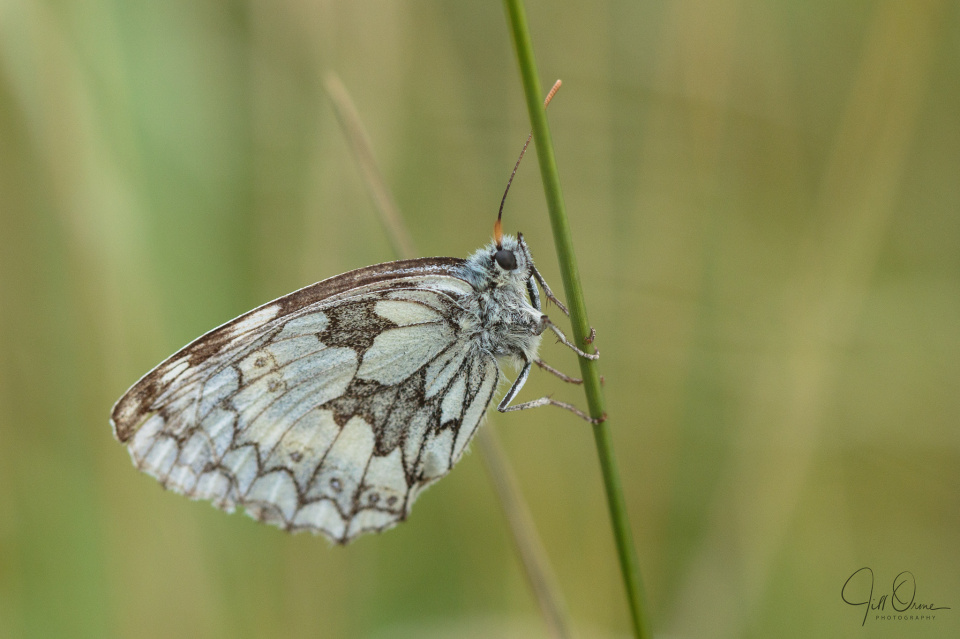 If the weather doesn’t improve soon, I’m going to be asking for a refund on my subscription. After a foul morning, it suddenly cheered up this afternoon, and I walked up to Tilly’s field to look for grasshoppers; but within ten minutes the sky had blackened, and it began to rain – fairly gently to begin with, but on a swirling wind that ensured that my current subject and I got wet from top to bottom and all ways round.

“Just a shower,” I said to the grasshopper, risking a glance overhead. He looked sceptical, as well he might. Soon I had to accept that actually it was now raining quite hard, and after firing off a final burst of frames I left the relieved grasshopper and went to shelter under a tree. A few minutes later R (who had also been out for a walk when the rain began) came looking for me and gallantly offered me his jacket. I thanked him but declined. “It’s stopping,” I explained. R made the same kind of snorting noise I’m pretty sure I’d also heard earlier from the grasshopper, but I gestured to the sky behind him, which was now almost entirely blue, despite the fact that it was still pouring with rain in the field. “Edge of the cloud,” I asserted – and sure enough, the edge of the cloud went over, the rain stopped, and the sun came out.

I started my grasshopper hunt again, but was distracted by the emergence of some butterflies: Meadow Browns and Gatekeepers as usual, but also a couple of male Common Blues, and this lone male Marbled White. They all skittered about on the breeze, enjoying themselves in the sunshine for the entire five minutes or so that it lasted. Then the cloud rolled in again, and the wind became ferocious, whipping all the long grasses back and forth, making life very uncomfortable for the poor butterflies, and reducing me to a seething fury.

I only recently discover that both the Offspring suffer from wind rage – something (else) I should probably apologise to them for, because they definitely inherited it from me. I don’t mind cold weather – in fact I handle the cold better than R does, despite having a slower metabolism – and I can tolerate rain provided I’m dressed appropriately and it’s falling straight downwards. But I cannot abide wind. Many years ago a wonderful and very skilled Chinese doctor told me that it wasn’t good for my health, which does seem to be true – but it’s incontrovertibly very bad indeed for my temper, and I therefore try quite hard not to be caught in the middle of a field of tall grass, pointing a macro lens at a butterfly, when a swirling gale starts blowing.

If there was anyone in Tilly’s feld who was having a worse time than I was, it was the Marbled White. If you have the time to view this full-screen, you’ll be able to see the unusual way he’s clinging to the grass stalk, with all four feet wrapped around it.* I’ve deleted the dozens of images I took in which he’d been blown out of the frame, or the plane of focus, or was more or less obscured by other grass stalks blowing between him and the camera, but even in this one he was being twisted away from the focal plane, which is my excuse for the fact that only his front end is in focus. I wanted to post him though, because this is the end of the Marbled White season and he seems to have arrived a little late to his species party, being surprisingly fresh and handsome. Though I doubt he’ll still look this dapper by the time the gale abates.

On my way out of the field I suddenly spotted a drifting damselfly, so of course I pursued it to rest and began trying to get a photo for my records. I was close enough to be at least half sure that it was a female White-legged Damselfly, which was quite exciting because I haven’t recorded one in the village for a couple of years, but between the whipping movement of the grass and the damsel’s evasive action it proved absolutely impossible to focus the lens on it, and after a few minutes of increasing frustration I lost it altogether. At which point my rage reached apoplexy level, so I went home and told R all about it. He was thrilled.

* In case you were thinking “Four feet…? But…?” I thought I should point you at an explanation: Marbled Whites belong to the Nymphalidae, a family of butterflies in which the forelegs are vestigial – something you can read about here, if you’d like to know more.