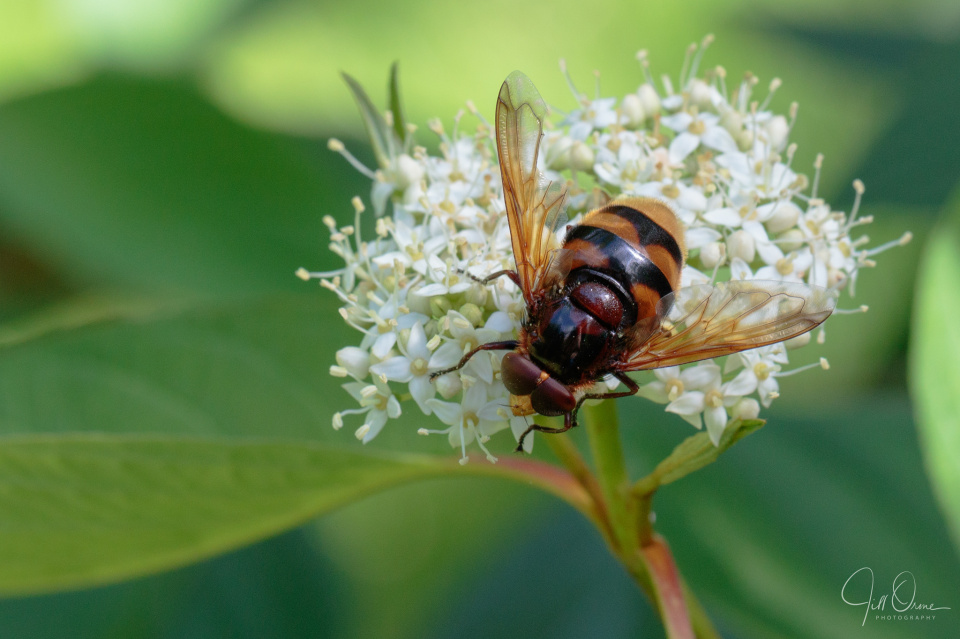 Whether because of the changeable weather, or because there’s not much flowering in the borders at the moment that they like, I’m currently finding very few invertebrates when I go on bug hunts around the more cultivated sections of the garden. Luckily though, the dogwood in the wild garden has become the gift that keeps on giving: all manner of flies, moths, and butterflies are attracted to it, which in turn makes it attractive to predators, and to me.

This morning I was standing close in to the shrub, struggling in dark and windy conditions to get good photos of a Marmalade Fly that was browsing the flowers, when two surprising things happened. Firstly, the sun suddenly appeared, and secondly a loud buzzing caused me to turn and discover that this Volucella zonaria had arrived and begun dining just behind me. I can only think that he hadn’t spotted me, because when I began taking his photo he wasn’t pleased, and removed himself to the top of the bush where I couldn’t reach him – but by that time I’d bagged a couple of images, so I didn’t mind.

Shortly after this the sky darkened again and it began raining in a desultory and blowy fashion, but I stayed outside because three Southern Hawkers had now arrived and were hunting very close to me, and I was transfixed by their antics. I’m fairly used to having these dragons flying around me by now, but I don’t think I’ll ever stop finding it a magical experience. Because it was so dark they were flying relatively slowly, and I managed some record shots to share with the County recorder, but I didn’t expect to be take anything publishable, until I saw the younger of the two males fly carefully into a space within the dogwood, and perch. In contrast to the last Southern Hawker I posted, which was taken with a long lens from the top of a stepladder, tonight’s extra was taken from a kneeling position with the macro lens, a slow shutter speed, a wide aperture, and the Lumimuse. 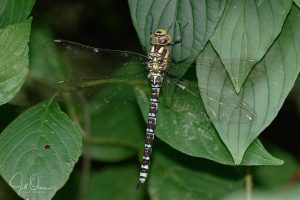 The other notable invertebrate-related incident of the day was a brief visit from a Brown Hawker – my first definite sighting in our garden. The light was good at that moment and he was flying fast, so I didn’t manage to get a lens on him, but I had an excellent view of his markings as he performed a complicated figure of eight hunting manoeuvre before zooming off over the hedge into our neighbours’ garden. When I went back to the house and shared this exciting news with R he was less impressed than I’d expected, on account of having seen the (or at least, a) Brown Hawker flying around the village, while out for his morning run. But with independent sightings we can at least be reasonably sure that neither of us was hallucinating!