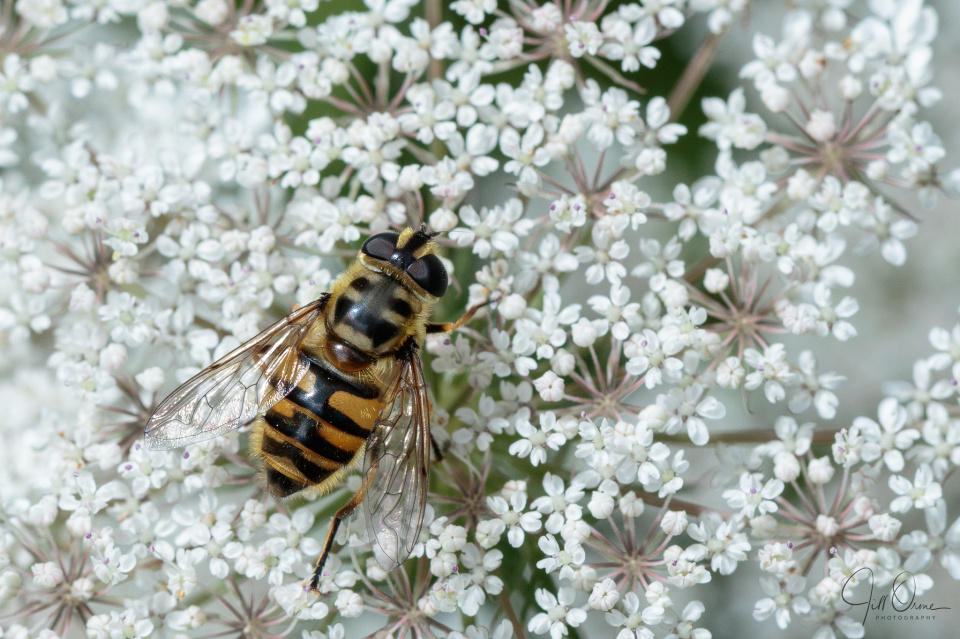 This isn’t the most exciting thing I photographed today but it has turned out to be my favourite photo, because I love the contrast between the rather saturnine hoverfly with her Batman logo, and the delicate, snowy froth of the wild carrot flowers. She’s a Myathropa florea, a species of which the males tend to be so reactive and irritable that my mnemonic for their Latin name is the word ‘misanthrope’ – but this female was entirely staid, calm and focused. Much like myself while eating – although I’d be highly displeased if someone involved themselves in my dining experience by sticking a large lens in my face, and she gave no sign of even noticing.

In other news, the butterflies in our wild garden are now getting seriously above themselves. The Red Admiral who believes himself to be in charge has now taken what seems to be a personal dislike to the youngest male Southern Hawker, and chases him away from the pond whenever he appears, despite me having quite strong words with him about it. And even worse, a fresh female Southern Hawker which was exploring the garden this afternoon was attacked by a Large White: having perched in one of the sycamores to rest (as dragons need to do quite frequently until their wings gain full strength), she was literally bounced on by the butterfly, and when she took off in alarm was then chased over the hedge into the next-door garden. A fully mature hawker is capable of taking and eating a butterfly, but while immature they’re vulnerable to predation themselves, and therefore wary of anything that seems to want to attack them. I can only hope that this female isn’t deterred from using our garden – and our pond – by of the attentions of a grumpy old butterfly.