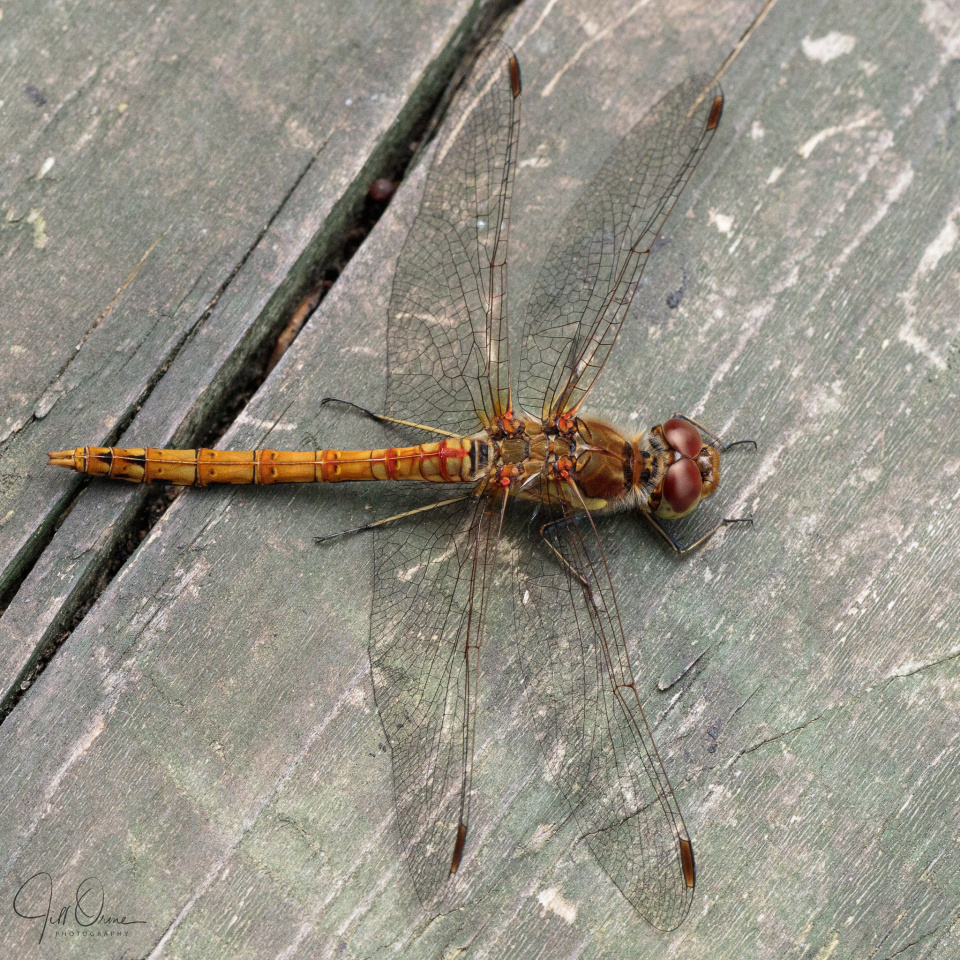 I had a great time in Trench Wood this afternoon, arriving home with so many photos that I’m still only part way through culling and processing them. I had hoped to gather together a few of the highlights and post them to my Facebook page, but I’ve run out of evening, so that will have to wait.

For now I’ve pulled out this dragon, because dragons – and because I was chatting to another Trench regular the other day about the fact that this bench generally seems to have something interesting sitting on it, so when I walked into the clearing today and saw this young Common Darter there I chuckled aloud. I can’t honestly claim that he was very pleased about the attention I was paying him, but by edging forward very slowly, backing off again each time he lifted off, waiting till he settled again, and then edging forward some more, I eventually got to the position from which I could take the photo I’d been visualising. I really like the contrast of colours and textures here, and the various intersecting lines.

The last time R and I went to Croome he expressed surprise at how small Darters are – because he’s used to seeing them in my close-up photos, of course, which often separate them from their environmental context. If I’d posted the first photo I took of this scene, from the other side of the clearing, you’d have a much better idea of the scale of dragon versus bench, but a much worse view of the dragon. So I’ll just tell you: a Common Darter’s abdomen and its hindwing are both 25-30mm long – so the whole insect is about 2″ long in old money, and a little more than 2″ across its wingspan. This male is still young, but his mature colouration is now developing; quite soon his abdomen will be orangey red all over, though it will retain those black markings, and he’ll also keep the yellow patches on the sides of his thorax. He’s very nicely displaying the pale stripes along his legs which make it easy to distinguish him from the similar, but black-legged, Ruddy Darter.

As a species Common Darters have one of the longest flight seasons of all the British Odonata, emerging any time from early spring to late summer, and staying on the wing well into the autumn, if the weather is reasonably kind. They can fly at lower temperatures than other small dragons, which tend to become inactive at around 12°C, but will perch on warm surfaces such as a sunny leaf – or bench – if they need to warm themselves up. In very hot and sunny weather, on the other hand, this is one of the species most likely to be seen obelisking so as to avoid overheating.