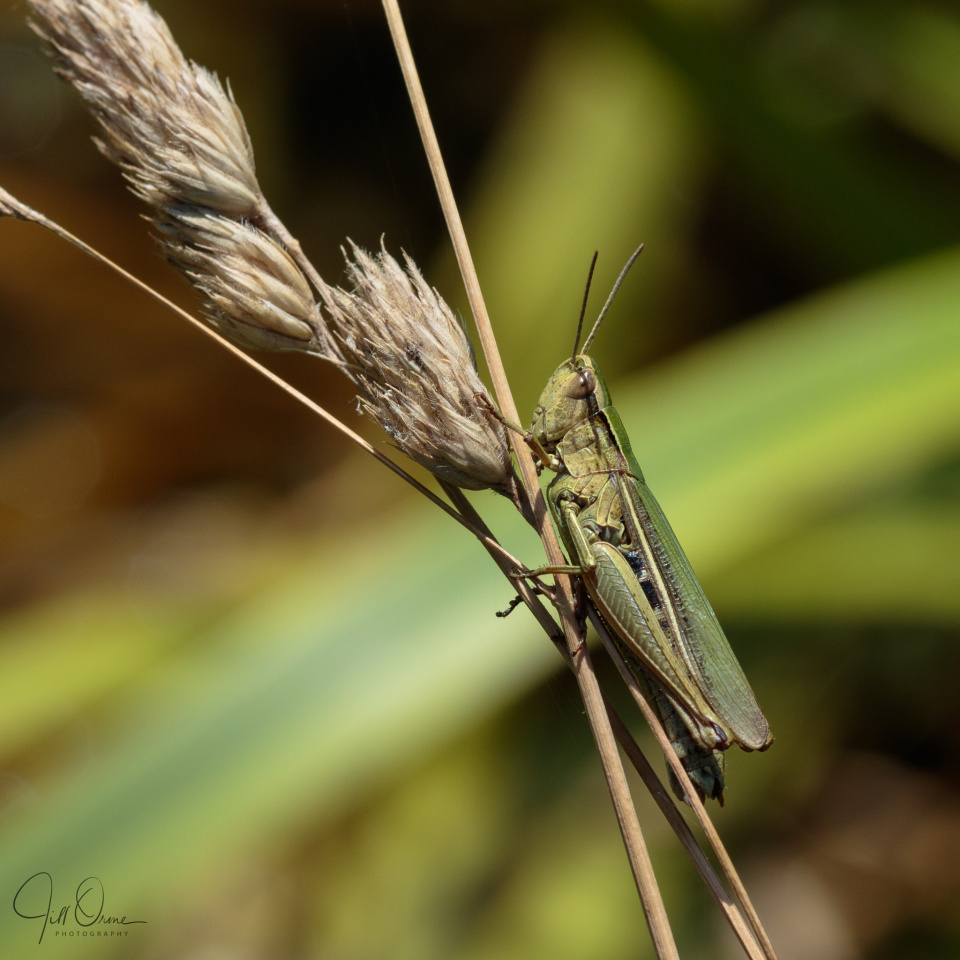 R and I went to Charlecote this morning, where most of the park is now open, bar a section to the north of the lake, which is still cordoned off as a sanctuary for the fallow buck herd. We walked most of the available paths, and enjoyed being out and about in the warm sunshine, but to my surprise I didn’t find very much to photograph. There were some Brown Hawkers hawking, and I saw a single male Banded Demoiselle at the lake, but it certainly wasn’t the Odonata-fest I’d been hoping for. While we were drinking coffee at one of the picnic tables close to the River Dene I became unreasonably excited when I spotted some Purple Hairstreaks in a large oak tree near the entrance to the stable yard, but though they were very active they were all too high up for photos.

So I was pleased to spot this Lesser Marsh Grasshopper in quite nice light on the foliage at the edge of the Dene, just as we were preparing to leave. I still struggle sometimes to tell the difference between these guys and the very similar Meadow Grasshopper, but I’ve checked my ID with the People Who Know, so you don’t have to worry. Some people will tell you that if Chorthippus grasshoppers have dark knees, as this one does, they have to be Chorthippus parallelus, the Meadow Grasshopper; but a more reliable indicator that this is C. albomarginatus, the Lesser Marsh, is that the lower edge of the wing as you look at this photo is almost straight, whereas in C. parallelus it’s curved outwards towards the hind leg. The other indicator is that the pronotal keel, which is the longitudinal line you can see running along the collar plate (marked out in cream here, though it isn’t always) is straight in C. albomarginatus, whereas it’s curved in C. parallelus. Essentially, C. parallelus gets all the curved lines, which is clearly ridiculous; when I get to make the rules, things will be organised much more sensibly.

As we were walking towards the exit I noticed a young kestrel on the other side of the Dene that was behaving quite oddly: it would choose a perch, and then after sitting looking around for a few minutes would take off and float down to the ground, before lifting again and settling back on another perch. I hope it wasn’t trying to hunt, because I can’t see it catching much with that strategy. Anyway, one of the perches it chose was the very top shoot of a young tree, on which it sat very precariously for a while, occasionally having to flap its wings to keep its balance. This presented me with such a good opportunity to take a Bird on a Stick photo that it would have been quite rude to have declined.

On the way home we stopped in Stratford to run some errands, and discovered that the riverside area (which we avoided) was absolutely jammed with people, while the shops were largely empty. The much-despised temporary traffic scheme, which has made the town look like a building site while also making it virtually impossible for traffic to get through or for traders to receive deliveries, is due to be substantially changed; but it hasn’t happened yet, and the steady stream of drivers getting themselves into impossible situations and having to 3-point in order to get back out again provide an interesting extra hazard for the unwary pedestrian. Absolute madness.