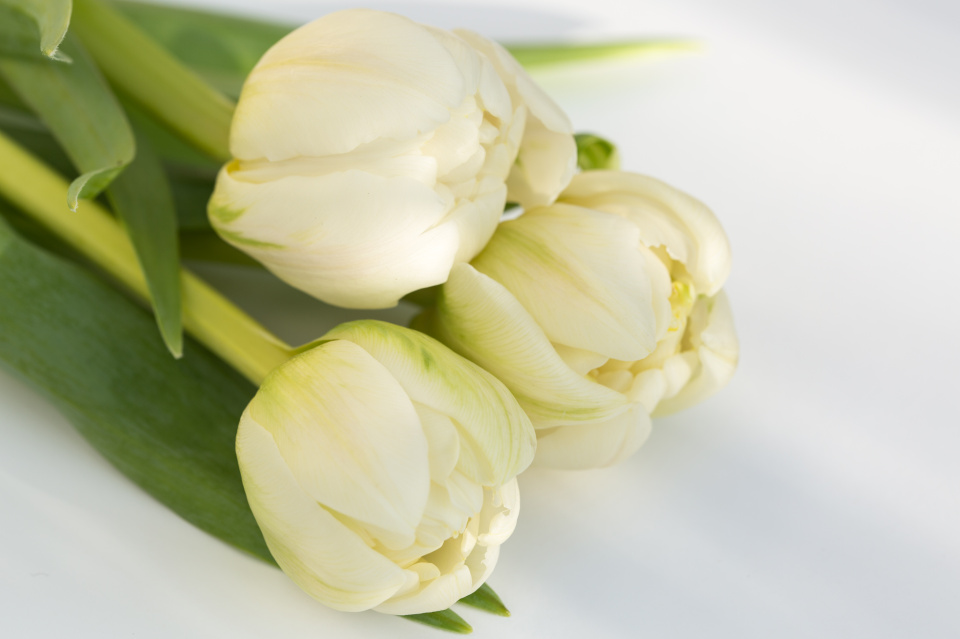 I didn’t achieve much that was actually useful today, but I did have a go at the first part of this week’s challenge in A Year With My Camera, which as I mentioned yesterday is to shoot something white on white, and something black on black. I had a notion that I’d find some white chrysanthemums at the supermarket, but that turned out not to be the case, so instead I bought a mixed bunch of spring tulips and anemones, and photographed the cream tulips on a piece of white foam board.

The purpose of this exercise is to demonstrate to anyone who shoots in auto mode the value of getting the camera onto manual, because as you probably know if you take a shot like this on auto the camera will try to make it grey and it will therefore be underexposed. I learned this when I took Nick Kelsh’s Going Manual course, so I didn’t really need to do the exercise as a learning experience, but it was interesting to take this same shot on auto, then aperture priority, and then finally manual – and nice to get the manual exposure pretty much right in-camera at the first attempt. This histogram was actually spot-on, but the shot looked overexposed to my eye, so I toned it down a little in Lightroom to get this version.

It was actually the first time I’d ever had the 5D on any other setting than manual, and I nearly had a conniption fit when I tried to autofocus and nothing happened – for a stomach-lurching second I thought I’d somehow broken my new lens. Then I realised that auto probably overrides back-button focus, and was hugely relieved that when I half-pressed the shutter the camera did indeed focus! I must remember to check that putting it back on manual also puts it back on BBF, or I’ll have another terrible fright the next time I use it…