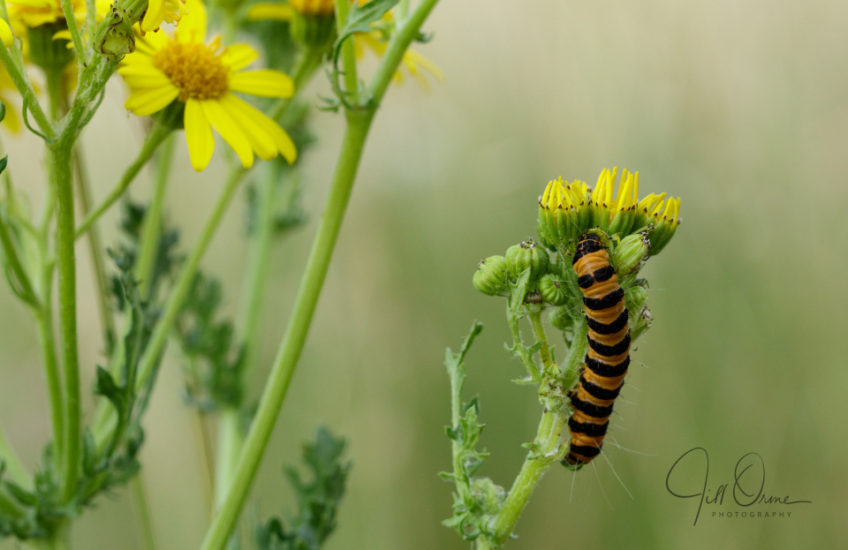 If you’re a Cinnabar moth caterpillar it’s the pyrrolizidine alkaloids found in your food plant ragwort, which render you both bitter-tasting and toxic – a fact which you advertise via your vivid stripy jacket, warning potential predators to give you a wide berth. Humans should also avoid touching you because your spines can inject toxin into the skin, leading to a painful rash.

As farmers and horse owners know, the alkaloids in ragwort are dangerous to herbivores, causing irreversible liver damage if eaten in sufficient quantity. In its live state the plant gives off an unpleasant smell which causes animals to avoid it, but this disappears when it’s dry; so the danger mainly arises if ragwort is allowed to grow in a field which is then harvested for hay. However the Cinnabar moth has evolved to make use of these alkaloids, and its caterpillar is such a voracious eater of ragwort that the moth has been introduced to parts of the United States and to Australia and New Zealand as a bio-control measure against the plant.

Cinnabar moths lay their eggs on the under side of ragwort leaves. As soon as the eggs hatch, the larvae set to work eating the leaves in the immediate vicinity, and by the time they need to move out onto the plant stem to reach other leaves they’ve already absorbed enough toxin to be unpalatable. There are birds which will eat them – cuckoos are said to be immune to ragwort alkaloids, for example – but on the whole it’s an effective strategy: the level of predation of Cinnabar caterpillars is so low that there may be too many of them for the available ragwort, leading to starvation – or even (reputedly) cannibalism of the weaker by the larger caterpillars on a plant.

The last time I walked through the butterfly field I didn’t see a single Cinnabar caterpillar, but since then there has been a mass hatching and this morning almost every ragwort plant I passed was occupied and being stripped. The caterpillars which survive and complete the larval stage, which involves five moults and takes about a month, will then burrow into the soil and pupate, emerging as adult moths next spring. The pupae may be predated by moles, and can’t survive prolonged waterlogging of the soil.

This seems to have been a particularly good year for Cinnabars in our village: I’ve seen more moths than in previous years, and there are already many more caterpillars in the butterfly field than I usually find (though as yet, sadly, none on the plant in my garden). It will be interesting to see if the numbers increase further next year.