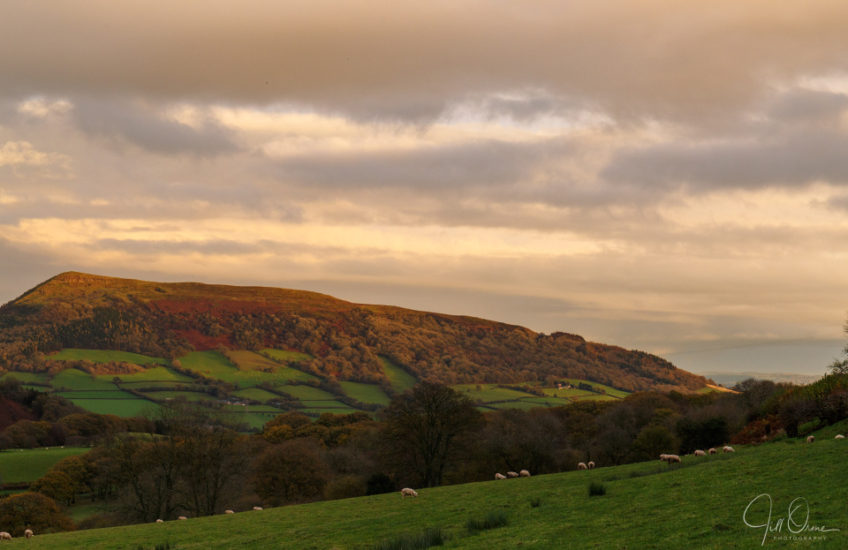 So….. that was an interesting day.

I interviewed two wedding venues, one by myself, and one in company with Child One and G’s parents. The venues were superficially similar, but actually quite different, and although neither one has absolutely everything that L and G might ideally want, either would provide the opportunity for the creation of a memorable event, and the owners of both were charming. So frankly, I’m relieved that I don’t have to decide between them.

I have photos of both, but I’m not blipping either because the decision hasn’t yet been made and I don’t think it would be fair. So instead, I thought I’d offer you some rather nice late afternoon light hitting a mountain. I’m not absolutely sure which mountain it is, because there are more mountains round here than you can shake a stick at, but it’s somewhere in East Wales.

It’s also possible that this is the only mountain in the region that I didn’t have to drive up and down today – though to be honest, I can’t even be certain about that. Both venues are reached via the kind of roads that snigger up their sleeves at being referred to as such – they’re essentially farm tracks that have been promoted quite a long way beyond their abilities; and if you’re now thinking “I’ve been to Cornwall – she must mean roads like that”, well, so have I, and no, I don’t. The roads in this bit of Welsh Wales are literally one car wide, with tall hedges, no passing places other than a scarily occasional farm gateway, and generally a thick line of moss and/or grass running along the centre of the asphalt because no vehicle is narrow enough for a wheel to touch that part of the road. They also go up, down and round like a rollercoaster track, except that you can’t see around any of the corners because of the hedges.

Have I ever told you about my fear of rollercoasters? Another time, maybe.

The good thing about these roads is that almost no-one uses them – I met literally no vehicles en route to the first venue, and just one as I was driving to my rendezvous with L, P and M at the second place. On the way out of there our three-car convoy met a van, but the driver sweetly reversed about half a mile to a point where he could pull in and let us get past him.

We than went in search of a pub for a drink and debrief, and at only the third attempt found one that was open (I managed to lose the rest of the convoy due to incompetence, but eventually caught up with them, so we’ll step around that). After a quick chat P and M had to leave to go to another appointment, but L and I stayed on for a meal and more discussion; she then went back to Cardiff, and I put HOME into the satnav and set off.

A few minutes later I began to get a bad feeling…. and a few minutes after that I was forced to the conclusion that there must be a mountain between the pub and the main road home, and that owing to extreme hubris on the part of the satnav, I was now on my way over it. In the dark. It was quite possibly the mountain in this photo – in which case I can tell you that it looks a lot better in this light than it does at 7pm on a wet winter night, when you’re caught between the twin perils of too much speed and too much traction, every new junction has you thinking “Surely not??? REALLY????”, and you can barely hear your iPod over the involuntary whiffling noise you’re producing yourself. I can tell you definitely that it was one I hadn’t driven over previously, though it was a while before I was certain of that fact – the reason that I am certain being that tonight’s road went through the middle of two farm yards, and this afternoon’s only went through one.

Given that it appears we may be spending a reasonable amount of time in this bit of Wales, I could well be looking to buy a second hand Land Rover Defender quite shortly.