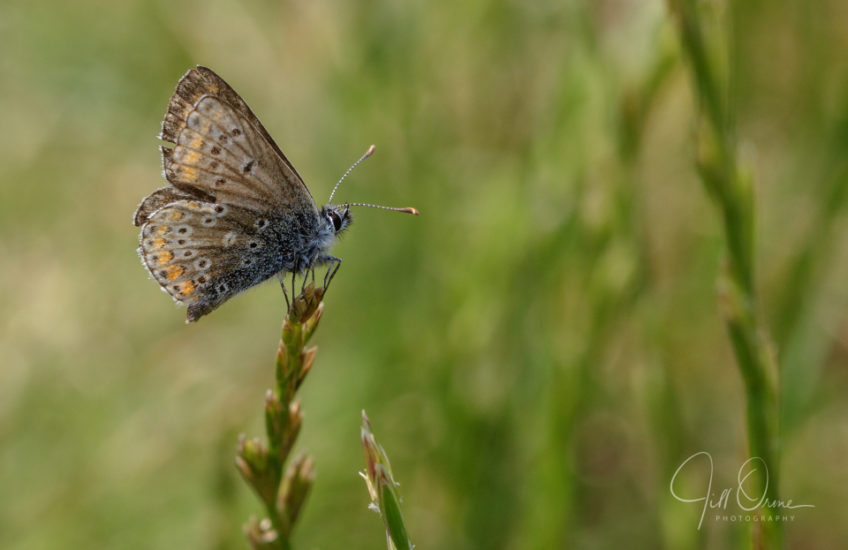 She’s old now: just look at how battered and torn her wings are. But she’s still pretty feisty. When I spotted her in the butterfly meadow this morning she was being buzzed repeatedly by an equally geriatric male, but she was having none of it – she saw him off every time, and then calmly returned either to browsing on nearby clover or to basking on some convenient perch; she sat atop this grass for so long that I had time to take over a dozen photos of her.

After a slightly cooler day yesterday it was blisteringly hot and humid again this morning; but for some reason I decided that it was a good idea to lug camera and macro down to the large untended field at the far end of the village which I call the butterfly meadow – and then failed to leave home until after 11am, so that by the time I arrived the sun was almost overhead and the temperature was in the 30s. Within minutes I was crimson and dripping, and very much hoping that I wouldn’t bump into anyone I knew.

Butterfly-wise though, it was a good decision. The first thing I noticed was that the entire meadow was teeming with Marbled Whites, which was a big surprise because there were so few in this field last year that I had to make a special trip to a nature reserve to find some to photograph. Today though there must have been well over a hundred – mostly males, though I did spot a couple of females too; it seemed as though every time I moved I put up another little cloud of them from some basking or feeding station. Then I happened upon the pair of old Common Blues, and spend several sweaty minutes crouching in various contorted positions to get shots of them. My tricksiest quarry were Skippers, which as well as being tiny were mostly highly uncooperative subjects, and therefore (naturally) became the thing I wanted to photograph most. In the end I did get some shots of one Large and several Small Skippers, and until I uploaded my files I was fairly sure that I’d be blipping the little furry face of a Small – but in the end I couldn’t resist memorialising this old lady.

The most exciting thing that happened in the butterfly meadow was towards the end of my circuit, when I accidentally disturbed a Cinnabar moth into flight – the vivid raspberry red of the hindwings is dramatic and unmistakeable, and always a thrill to see. Sadly, even though I made careful note of where it came back down I wasn’t able to find it at rest to get any photos, so I’ll just have to link you to [url=http://www.ukmoths.org.uk/species/tyria-jacobaeae/]this page[/url] so you can see what I missed. By this time my face was about the same colour as the Cinnabar’s hindwings, so I decided it was time to head for shelter before the radiant heat set fire to the undergrowth. When I got home I detoured into the back garden to examine the massive ragwort plant I’ve somehow neglected to weed out, in the hope that it might be feeding some Cinnabar caterpillars – but sadly the moths don’t seem to have found it yet. And then as I was heading back towards the house I spotted my final “catch” of the day: a Brimstone, calmly grazing on my detested perennial sweet pea, and the first I’ve seen so far this year that wasn’t in flight.

I’ve put a few of my favourites from today here.