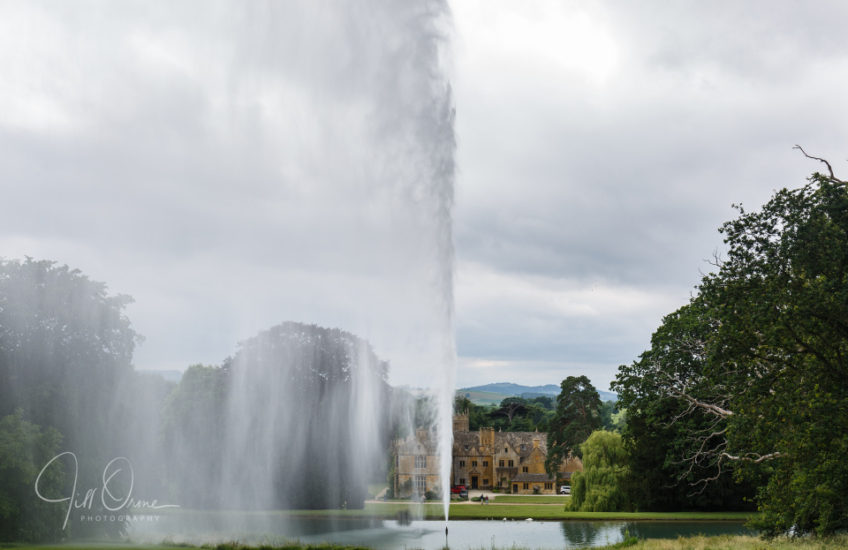 There are some amazing houses in the Cotswolds – jaw-dropping even for those of us who live here – but I don’t think I’ve ever been quite as enchanted by one as I was today by Stanway House. It’s owned by the Earl of Wemyss, whose name, if you’re neither British nor a collector of Scottish art pottery, is pronounced ‘Weems’, and who appears to live towards the artier and more eccentric end of the aristocratic spectrum. Had R and I known before visiting Stanway that he’s also an enthusiastic supporter of UKIP we might have thought twice about giving him our money, but if we had we’d have missed a treat.

The glory of Stanway is its garden, through which you can wander at will, and which is a lovely mix of formal sections and artfully landscaped ‘natural’ areas. The landscaping dates back to the C18th and includes several ponds and pools, including this one which is called the Canal, and which as you can see lies on a terrace above the house. Running down to the Canal is a steep cascade, only partially restored at present, with a stone pavilion at the top called the Pyramid.

The fountain is extraordinary. It doesn’t do anything clever – it has neither music nor lights, and there’s just a single nozzle sending water straight up over 90 metres into the air – but it’s mesmerizing. Although it looks to be of an age with the rest of the water garden, it’s actually modern – it was installed in 2004 – but it achieved instant fame because it’s the tallest fountain in Britain, and the tallest gravity-driven fountain anywhere in the world. It’s fed from a reservoir that lies behind the Pyramid, 175 metres above the Canal; the water descends through a twelve-inch diameter pipe and is ejected through a two-inch diameter nozzle, which explains the force of the jet. I can tell you that the climb up from the Canal, along the Cascade to the Pyramid and the reservoir, is not only extremely steep but also a pretty damp experience when the wind is blowing from the west: the spray from the fountain travels a very long way indeed.

The only other things I have to report about this lovely place are that there’s a working watermill (you can even buy freshly milled flour); that the tea room serves decent coffee and pretty good cake; and that if you sit down anywhere a resident dog (a collie lurcher I’d say) is liable to come and sit with you. Stanway’s own web site is here, and that my album of shots from this afternoon is here.