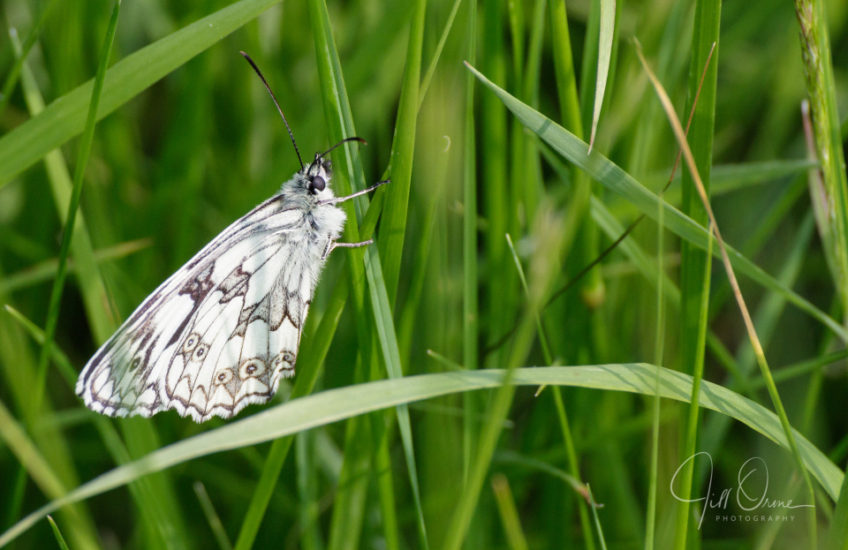 I’m a bit staid when it comes to photography: I like nice tidy shots with the subject in the appropriate place and no messy distractions. Which is strange really, because in real life I’m pretty disorganised, and I spend more time being distracted by things messy and otherwise than I do on whatever it is I’m supposed to be achieving.

Anyway, today I decided to take a stroll around Tilly’s field in search of butterflies, but so as to maximise my chances of getting some photos without trampling on anything I took my long lens – and very rapidly realised that this meant I was going to have to ditch tidiness in favour of something more impressionistic. And then discovered that (within reason) I do quite like this kind of shot. To show you what I mean, I’ve put a few of the keepers on Facebook.

Today the field was largely populated by Meadow Browns, but I also found a few Ringlets, and eventually spotted a single Large Skipper – probably the same one I photographed on Saturday. I was a little sad because once again I failed to find the faded Common Blue I saw last week, and I think he’s probably died. But I cheered up immediately when I caught a flash of white, and realised that I was on the trail of my first Marbled White of the year. It took me a few minutes (and I confess, a little careful trampling) to track him to rest and then get to a position from which I could focus on him; the first shot I managed is the one I’ve put in as an extra, and in the spirit of embracing the chaos it’s actually my favourite of the day.