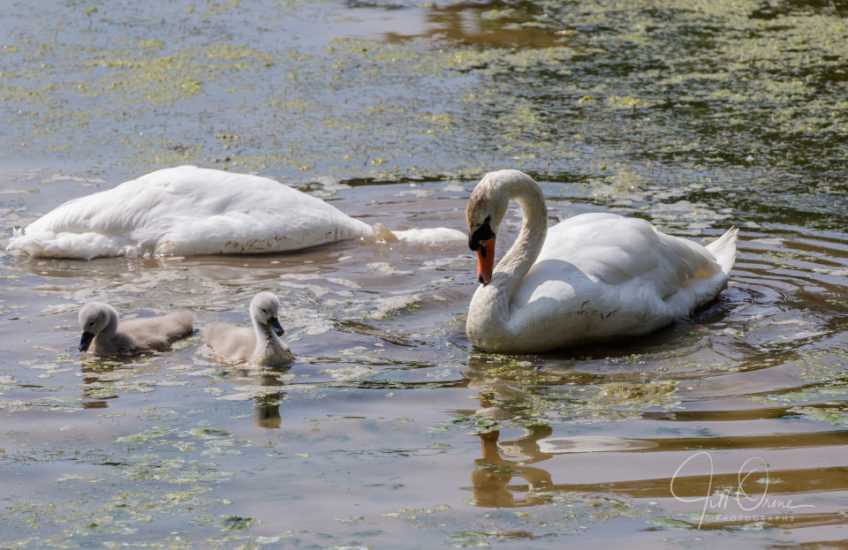 I went to Croome this morning, in search of dragons – which I did find – but in the end I couldn’t resist posting these adorable cygnets. The swans nested on an island in the middle of the lake, which you’d think would be safe from predators, so it seems surprising that they’ve only raised two offspring; however there are some absolutely humongous fish in the lake which I’ve not been able to identify, and if some of them are pike there may have been other cygnets which have been predated.

If there had been any stewards around I would have posed the fish/cygnet question – and also asked about the quality of the water, which is currently revolting. It’s only about a metre deep, so it gets very warm, which obviously encourages the growth of algae, but this is the worst I’ve seen it. Last summer there were quite extensive reed beds around the edge of the lake and along the artificial river, and when I noticed a few months ago that they’d been cleared out I did wonder if this would affect the quality of the water. I know that reeds are used as part of the management system of constructed wetlands – and also that they support a wide range of bug life – so the removal of the reeds here causes me double concern.

I’ve put a small album of swan shots from today on my Facebook page, if you’d like to see more. In some of them the pen appears to be lifting herself slightly out of the water, but what she was actually doing was flumping from side to side and agitating the water – a bit like a large feathery posser – and then dunking her head under to feed. So it seems that the soupy state of the water wasn’t worrying her, at least.