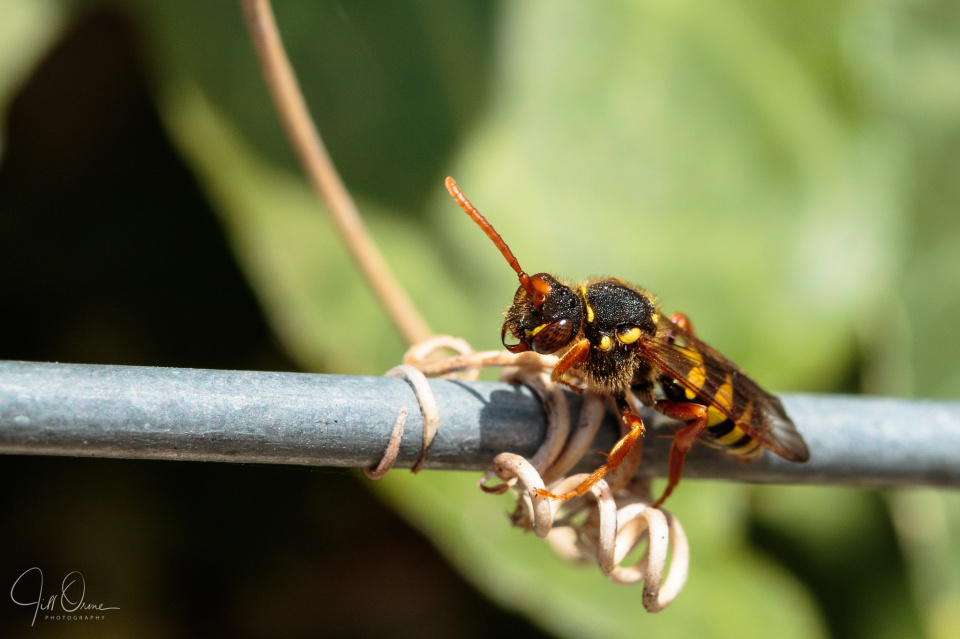 I wasn’t really sure why she was flashing her mandibles at me, but I smiled back anyway – though I have to say that if it wasn’t for the fact that she’s only slightly more than an inch long, it might have been a little unnerving.

She’s a nomad bee, all of which are cleptoparasites of other solitary bees. Today I had two different Nomad species searching the old dry stone wall I refer to as my bee hotel, probably for Andrena nests. When a Nomada finds a nest that’s to her liking, she will lay her egg in an unsealed egg cell, and after the cell has been sealed by the host, the nomad larva will destroy the host egg and then feed on the supplies left by the mining bee parent.

This particular bee is a Nomada goodeniana. I had this identification checked by the bee people earlier, but I was already pretty confident; the features that identify her are the unbroken yellow stripes on her abdomen, yellow spots at the front and rear of the thorax, yellow tegulae (the nodes where the wings meet the body), and yellow marks down her face at the inner edges of the eyes. I knew she was a female because her antennae are completely orange, whereas those of the male are partly black – though the way she was searching the wall was also a strong indication that she was looking for a nest and not another bee.

It’s largely anthropomorphism, I confess, but I do find these tiny nomad bees slightly sinister. They fly in a way that’s rather unusual in bees, drifting silently about with all their legs dangling down, and somehow managing to look both detached and relentless. Their yellow and black markings are wasp-like, but so far as I know they don’t sting, and the adults are nectar feeders – so they’re not even slightly dangerous, except to the Andrena eggs they parasitise.

I was stalking the nomads along the yard wall this afternoon, when something that much more closely resembled a wasp flew past my head and crashed down onto the ivy, causing me to jump a little. I didn’t have my glasses on, and it was only when I focused the macro on it that I could see past its really rather good disguise and identify it as a hoverfly. I’ve put a photo of it on Facebook, if you’d care to take a look.