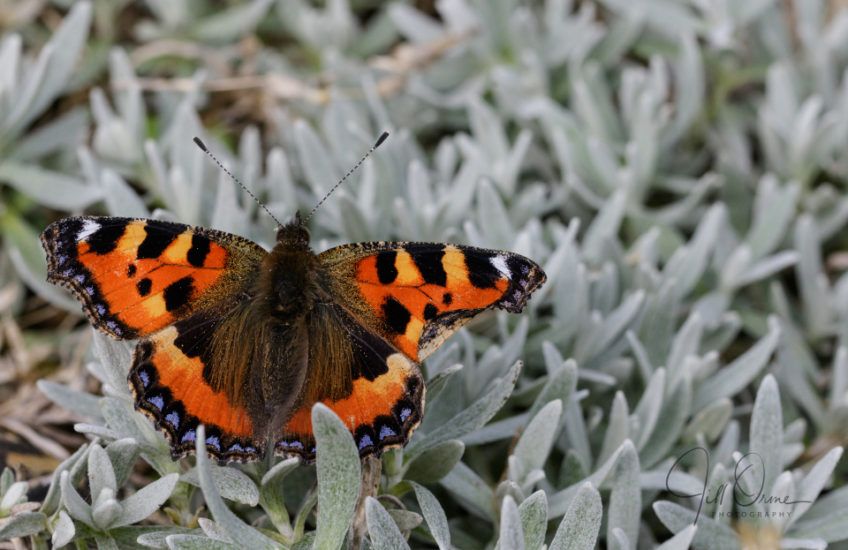 As happened yesterday, I spent this morning waiting for the murky light to improve, only to have it do so too late for me to go out. As you know, when I’m in a bad mood I like to take it out on something, so I stomped off outside to clear another section of the jungle which is the front garden.

During the couple of hours I spent hacking and slashing at weeds and bramble, pruning shrubs, and tying in an over-exuberant clematis, the garden was visited by a number of nice bugs including both dragon and damselflies, but most didn’t stay long enough for me to fetch my camera and macro from the porch (where I’d left them safely out of reach of my temper). This Small Tortoiseshell though is one of two which are more or less resident, and he spends quite long periods simply basking, which allowed me the time to take some leisurely shots of him. I recognise him by his folded right forewing, which is probably congenital and which doesn’t seem to trouble him. In this image he also appears to have only one labial palp, which are the short protuberances on either side of the proboscis of a butterfly that tend to be carried projecting upwards and forwards, looking like little horns; but I checked some other photos I took of him both yesterday and today, and in fact he does have both palpi, but the left one droops downwards and inwards – again, quite possibly a developmental defect. Despite the fact that these faults preclude a career in the show ring, I think he’s rather splendid, and as Small Tortoiseshells are in decline at the moment, due to a parasite which attacks their larvae, it’s always a pleasure to see them around.

Late this afternoon I was sitting in the wild garden, drinking a mug of tea and watching the bug life going about its business, when I spotted a rather strange something flying about forty metres away – at first I thought it might be a couple of white butterflies flying coupled, but then I realised that some kind of struggle seemed to be taking place. I was on my way to see if I could get a better view, when first one pale object and then a second one separated from the flying thing and floated to earth, proving on inspection to be the ripped wings of a Small White butterfly. By now the flying thing had disappeared, but I couldn’t think of anything other than a dragonfly that could catch a butterfly in flight, and bite off and spit out its wings while still in the air. So I waited – and no more than a minute later a male Southern Hawker appeared, looped a single loop and came to rest high up in the cherry plum tree. I think he must still have been chewing on his unfortunate victim, because I had time to walk the hundred metres back to the house, fetch the Big Lens and a monopod, walk the hundred metres back again, change lenses, attach the monopod, and rattle off about twenty frames at the assassin before he suddenly took off again. The extra is the best image from the set – not my best work, but I think clear enough for you to see the differences between him and the female I posted yesterday, if you should be interested. 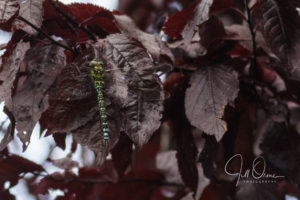 On my way back to the house I walked around the corner of the pear tree bed which divides the top and bottom sections of the garden, and there he was again – this time flying low hunting circuits. I stopped and watched him for several minutes; his track came so close to me that I could clearly see his shape and markings, and could even hear the clattering of his wings over the sound of the wind and the susurration of foliage. I hoped that he might come to rest again, at a better height for me to take some more photos, but after maybe a dozen circuits he suddenly flew straight towards me, and then up and over my head – and was gone.