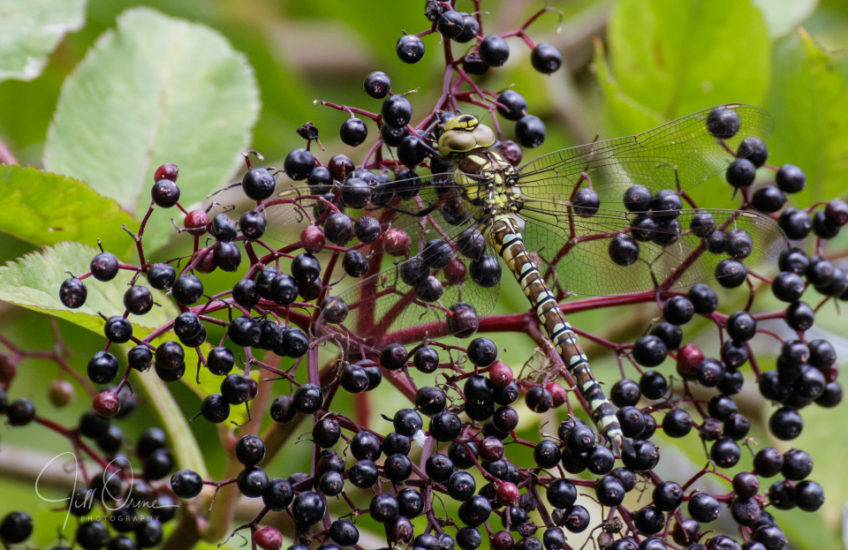 Today didn’t start well: the weather forecast had promised a warm and sunny day, so I sprang out of bed and threw open the curtains… onto a scene of misty murk that looked more like October than August. Definitely not butterfly weather. So I sat moodily at my desk, processing old files, and muttering darkly every time I looked out of the window and saw no improvement.

And then I spotted a Southern Hawker, hunting along the hedgerow on the other side of the road.

In the time it took me to get downstairs with a camera, don boots, and tell the decorator I was going out, she had – of course – disappeared. By this time there were a few bees and butterflies about, so I banked some shots of those, and then went off on a dragon hunt. I had a reasonable idea where she’d most probably gone: Hawkers hunt their prey insects on the wing, but tend to perch to eat immediately they’ve caught something, and therefore they favour at least partly wooded areas, rather than, say, open grassland. The main part of this village consists of a ring of properties, enclosing a block of long gardens with mature trees (in other words, ideal Hawker territory), but knowing that she’d been hunting along the road suggested to me that it would be worth checking a section of the lane which is lined with tall hedgerow on both sides – and sure enough, there she was. I watched her hunting for several minutes without managing to get focus on her once, before she landed in this elder tree, and having taken good note of where she came down I was finally able to approach and take some photos.

She? Yes, this is definitely a female. My rule of thumb is that the females of this species are thicker in the waist than the males (no, please don’t); but there are other indicators too. A chap in the UK Dragonflies and Damselflies group on Facebook has compiled this comparison chart, which is more helpful than much of what appears on line and in reference books; and several features, such as the pale ring distal to what I think of as the cat mask marking at the base of the abdomen are visible in this shot. Generally, female Southern Hawkers are greener than their male counterparts, as this individual is, but in my experience both sexes can be quite variable in colour.

Later in the morning I briefly saw either this Hawker or another one in our wild garden, and later still I went for a walk around the village and spotted several hunting dragons (though none close or still enough to photograph). Excitingly, because I’ve never seen one here before, I’m pretty sure that one of them was a Darter; but sadly all I saw was the size, shape and red colouring as it flashed over my head, which wasn’t enough for me to properly identify and thus be able to record it.