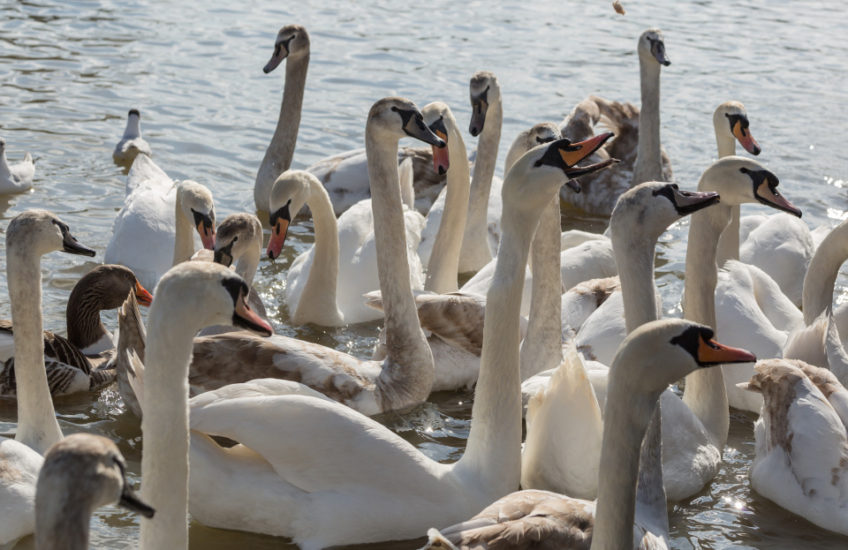 You haven’t had a swan melée for a while, so please accept this one with my compliments.

Today has been a day of post-Bach anticlimax, made worse by the fact that I’ve been tired and in pain. My back has been dodgy since I did some ill-advised gardening a couple of weekends ago, and wasn’t helped by the several hours I spent yesterday sitting on a hassock on the stone base of the chancel rail in Chipping Campden Parish Church – a position I would have defended to the death against anyone who’d tried to oust me from it, because it put me smack in the centre of the alto section and gave me a good view of the conductor, but it wasn’t exactly ergonomic seating. And my right shoulder, blessedly pain-free for a couple of months now since a steroid injection, has started to play up again and is currently complaining bitterly about me having held up a heavy vocal score at chin level yesterday, so that I could watch the conductor over the top of it.

Suffering for my art – but needless to say, doing it with stoicism and grace. Not!

My temper wasn’t improved this morning by Facebook telling me, every time I opened it, that it’s the First Day of Spring! I accept that it’s the vernal equinox today – a fact worth celebrating in itself (though interestingly, according to the ephemeris, in this neck of the woods the day on which sunrise and sunset fell exactly 12 hours apart was last Thursday) – but I’ll be damned if anyone is going to force me to celebrate the start of spring, when as far as I’m concerned that’s determined by meteorology and cyclical changes in the natural world, not by calendar. English people of my generation were taught that spring was the season when we could start to remove the layers of flannel underclothing in which our parents had swaddled us through the winter, but that we must ne’er, under any circumstances, cast a clout till May be out – and it’s not: I checked today, and though it’s budding (and will be blipped quite shortly, from the look of things), budding is not the same as out. Until it’s properly out I will continue to wear several layers of newspaper and goose fat under my vest.

By the way, while I’m on the subject of clouts ne’er being cast, I must say that I feel the younger generation are sadly uneducated on this valuable point of principle. I’ve seen young women tottering along Broad Street in Birmingham in the middle of December wearing less than I would consider appropriate on a Greek beach in August; my strong urge to tell them to cover their kidneys before they catch their death being tempered only by my slightly stronger desire not to get smacked in the face. But I digress.

It would be fair to say that I wasn’t on best form this morning, what with one thing and another, but luckily R has known me for many, many years now, and knows that taking me out for a meal is generally a reliable route the improvement of my temper – so we went into Stratford at lunch time and had a delicious meal at Loxleys, one of our favourite restaurants. By the time I was on the right side of two and a half courses I was feeling positively spring-like, and skipped down to the river after lunch to see what I could find to photograph.

Though it was cold enough to make me grateful for the goose fat, the light was really lovely and there were lots of people out on the water, or just strolling about on the bank doing the normal Stratford rivery things. I took quite a few photos of people, boats and birds, but I never can resist a water fowl feeding frenzy shot, even though I confess to feeling slightly guilty at taking advantage of a situation I essentially disapprove of.  Interestingly though, while I was watching this scene I heard a voice behind me say:

“It’s all wrong of course – that’s completely the wrong food to be giving those birds.”
“Oh?” said another voice, “What should you give them, then?”
“Oh, you know, peas and stuff. Carrots. Stuff like that.”

So the message is starting to spread. I hope one day to be blipping shots of small children down at the Avon with bags of defrosted petits pois, but though today is not that day, at least the chunk of bread which is about to fly over the head of this swan is wholemeal, and therefore does have a certain amount of food value for whichever bird managed to grab it.