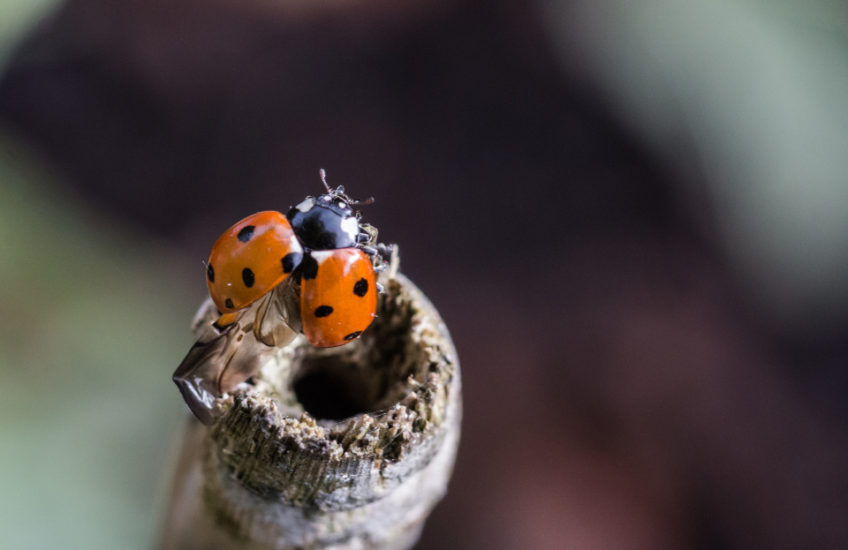 R and I spent an hour in the garden this afternoon, clearing weeds and brambles. I’d like to say that you can see the difference we’ve made, but the beds don’t actually look noticeably better – it’s just the heap of debris on the lawn that says how hard we worked. But it was good to be out in the fresh air, and if we can keep doing a little each time we’re both free, sooner or later our progress will start to show.

We debated for some time over my blip today: R’s favourite is the extra, which surprised me because he’s not noticeably fond of spiders – but he likes the composition and the autumnal colours. This spider has been sitting on top of an acorn for the past couple of days, but today it emerged onto its web – I guess because the sun was out and there were more insects flying, it had a greater chance of making a catch. I do like the way it seems to be peering out from underneath its fringe – and the colours of the fading oak leaves in the background. 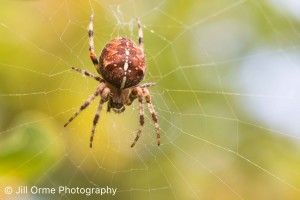 But in the end I decided that I had to blip this ladybird, unpacking one of its wings. I don’t think ladybirds are all that bright, actually. There are quite a lot of them around at the moment, seemingly looking for places to hibernate – but their choices of nest sites leave quite a lot to be desired. For a start there are the ones that keep trying to set up their winter quarters in our kitchen; for a couple of years I allowed that to happen, but of course it’s too warm for them, so they wake up early, can’t find anything to eat and just die all over the place. There are also currently a pair of them huddled at the junction of two oak leaves, just behind that spider’s web – apparently unaware that pretty soon the leaves will be descending and they’ll be homeless again.

And then while I was clearing out the fruit bed, removing this year’s fruited tayberry canes and tying in the new ones, I found another pair investigating the top of this old broken bamboo cane. When I first saw them this one appeared to be wedged inside the shaft, and the second one was running up and down the cane: I took a few shots of it, but it was skittish and quickly flew away. Then this one backed out of the centre of the cane and began wandering around the top edge – it kept spreading its wing cases, and then closing them again, as if it couldn’t decide whether to go or stay. And then it unpacked one wing, which astonished me, because I’ve never seen this before. I always assumed, without actually thinking about it properly, that their wings were the same size as the wing cases – but watching this happen was like seeing someone snap open a folding umbrella.

Having opened the one wing, I expected that it would unfurl the other one and leave, but for the next minute it continued to wander about trailing the wing, like a Victorian music hall singer strutting around the stage trailing a feather boa. In the end I began to be afraid that it was injured in some way. And then suddenly, the other wing emerged, and it flew. And yes, I did catch the moment  – but I was startled, and my shutter speed wasn’t quite high enough, so the shot is blurry.

By the way, I’d like to stress, in case our esteemed Home Secretary should be reading this, that this is a 7-spot indigenous ladybird, and definitely not a migrant.  “British ladybirds for British gardens.”