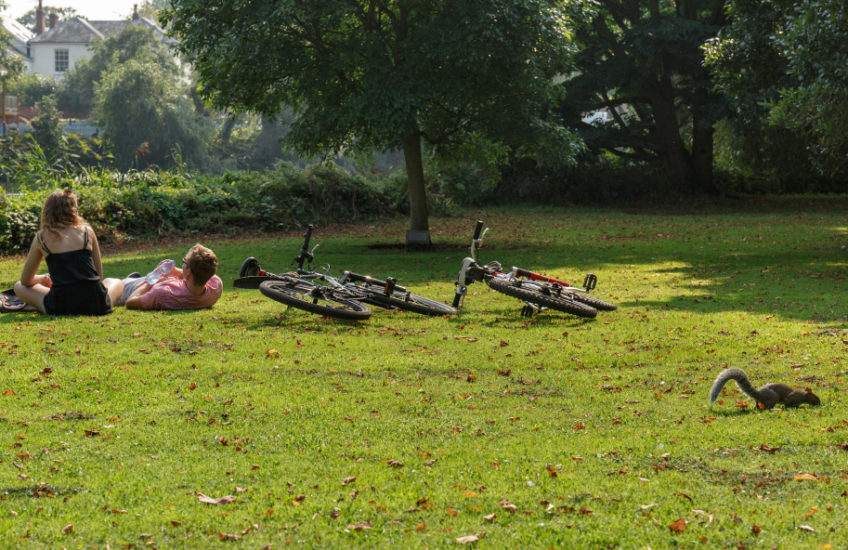 Look who’s behind you!

It has been a busy day today. This morning R and I went to Coventry and test drove two cars; one of these had been my suggestion – purely because I knew he was uninspired by the vehicles he was already considering, and I thought he might just possibly like it – but it didn’t really occur to me until after he’d driven both that he might seriously consider it. The upshot of the drives however was that neither one was an immediate and obvious choice – there were up and down sides to both, and the money worked out about the same for either – and I began to be slightly twitchy that he might take up my suggestion, and then not like it….

On the way back from Coventry we went into Leamington Spa for lunch, and spent a while in Jephson Gardens, which is a lovely place, and clearly a favourite among the locals. There were a lot of people there exercising dogs, toddlers or themselves, eating at the very pleasant cafe, or simply enjoying the Indian summer we’re currently experiencing. The resident grey squirrels are very sure of themselves, and I had been photographing this one for a little while, wandering about and scavenging under some trees, when he crossed in front of me, and turning I suddenly caught him in shot with the young cyclists. Who must have been drenched, by the way – I went down on one knee to get this photo from a low angle, and the leg of my jeans was promptly soaked through.

Back at home I did some admin-type stuff, and then had to go early to choir for a meeting: our Director has been carrying the entire organisation on his shoulders since it was founded, but increasingly finding all the running about too time-consuming and tiring, so volunteers had been requested to take some of the non-musical tasks off his hands. As of this evening I am the Facebook administrator, so I need to shift myself over the next few days and construct a page. We then sang Mozart for 90 minutes – this is the first time I’ve ever done the Requiem, and I’m loving it. It’s harder in passages than I had expected, but quite a lot of people have clearly sung it before, which makes it easier for the rest of us to learn it. I’m already looking forward to November’s concert!

And then I got home and discovered that, having spent the evening comparing specifications, R is currently leaning slightly towards the car I suggested to him. I’m now chewing my fingernails, because if he buys it and then hates it, it will be my fault…….

But looking on the positive side, I can always leave the country.

My passport expires on Friday…..