Or maybe that should be Barmy.

Even though R is now edging away from buying the car I suggested, and the chances of me being judged to have ruined his life are therefore diminishing, I still felt that it would be wise to renew my passport today – just in case things do go awry and I suddenly need to leave the country.

The Passport Service is trialling a new idea at the moment: you can renew your passport entirely on line, if someone will take an uploadable phone photo of you that meets all of their many criteria. So we wasted some time this morning trying to do that, but failed because we couldn’t come up with a plain, pale backdrop; and in the end, with tempers fraying all around in the heat and humidity we’re still experiencing here, I decided that it would be better to do the application and payment on line but send in the traditional hard copy photos. So this afternoon we zoomed off to Stratford with my old passport and the printed copy of the on line application form, for coffee and photo booth photos.

What a joyous experience that was.

There are two photo booths in the main Post Office, both of which require £5 in coins. One of them makes no attempt to show you the photos before printing them; the other claims that it does let you check them, but in fact doesn’t. But if you’re sitting with your back pressed against the back of the booth, and the reflection of your eyes in the glass pane is level with the thing that says “Eye level”, you must be in the right place, surely?

No. Apparently not. So that was £5 wasted on a set of hideous, cold, contrasty photos in which my face was in danger of sliding out of the bottom of the frame.

At which point we decided to go for coffee and a regroup.

While we were having coffee R casually asked if I had scissors with me, to cut up the strip of photos. Cue the noise of my teeth grinding. But as I was almost out of pound coins, and my coffee was too hot anyway, I decided to pop over to W. H. Smith and buy scissors and a small ruler, with cash – which I did, achieving the requisite amount of change. As I was walking away from the till I noticed that Smiths also have a photo booth, so I thought I’d try that one instead of going back to the Post Office.

When it told me that it accepted notes, but then spat my fiver back out every time I inserted it, I began to get a Bad Feeling.

The Smiths’ booth was apparently a step up from the slightly better of the two Post Office ones in that it projected a virtual frame in which to centre your face, and did actually show you what it had taken before printing it – but it only allowed you three attempts at a properly composed image. My three were:

1. Chin on bottom of frame;
2. Chin very slightly above bottom of frame;
3. (By pressing myself so far back against the back of the booth that I must have been at least half an inch further away from the camera) tiny, distant head and shoulders.

Knowing that the Passport Service will only accept a photo in which the overall length of the face is between 29 and 34mm, I didn’t dare print number 3, so I took a punt on 2 – and out came a set of soft-focus photos of a woman with severe jaundice. On the plus side, I was now in possession of a pointed implement to bang my head against.

Back at the coffee shop, R and I examined both sets of vile photos and carefully measured them with my little ruler. The jaundiced JDO was definitely too long in the face (literally as well as figuratively), and though the harsh, contrasty JDO was arguably within the length guidelines, depending on the allowability of Big Hair, the lowest of her chins was almost certainly too low in the frame. R, who was now doing The Guardian crossword and pretending to be somewhere else, handed me another £5 note and suggested that the barista might change it for coins, which she sweetly did.

Almost weeping with rage by this point, I marched back into the Post Office, wound up the stool until my eyes were well above the Eye Level mark, handed over another £5, rammed myself hard against the back wall of the booth, and pressed the button. After giving the matter due consideration, the machine spat out a sheet of mug shots in which the face was vaguely centred vertically but way off horizontally, and in which my eyes appeared to be either raised in mute supplication or rolling back in my head as I lost consciousness.

Back at the coffee shop R emerged from The Guardian, examined the third sheet of photos, gave me a Special Look, and said, “I think those will be OK…. Probably…”

So I cut two of them from the sheet, added them to my envelope, and returned to the Post Office yet again to send them off Special Delivery to the Passport Office in Peterborough. Having completed this transaction, the counter assistant asked, “Is there anything else I can do for you today?”, and biting back the more waspish responses that came to mind, I said, “You might let someone know that the far photo booth isn’t working properly – it doesn’t display the image before printing it.” Her response: “Oh, OK – I’ll report it. Those machines are absolute rubbish,” (delivered in a clipped South African accent) was, I felt, a masterpiece of understatement.

My main image features some of the barges moored in the Bancroft Basin, with humans and dogs enjoying the late afternoon sunshine. I first spotted the heron in the extra on the nature reserve in the middle of the Avon, but it then wandered over until it was almost underneath the Old Tramway Bridge on which I was standing – which was surprising as I didn’t know the river was so shallow there. It’s quite heavily cropped because I was using the 24-70 lens today, but I like the unusual angle, and the blue sky reflection in the water. 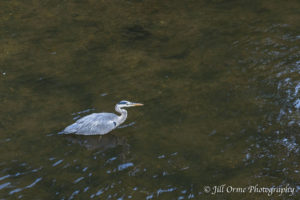