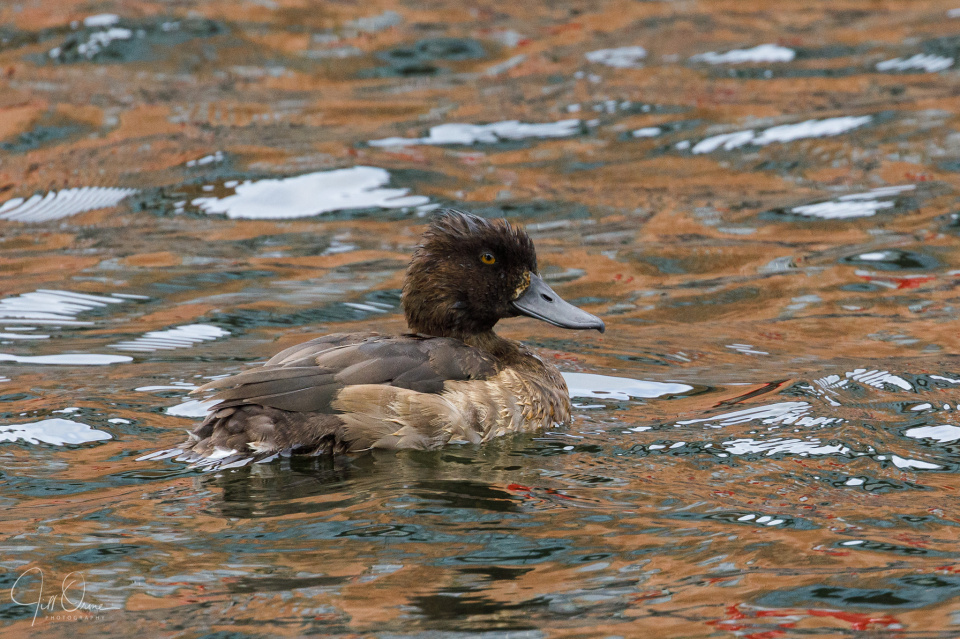 It’s unusual for me to be photographing Migrant Hawkers and incoming tufted ducks in Stratford on the same day, but that’s what happened this morning: a small, mobile, and twitchy flock of nine tufties was exploring the area between the Old Tramway Bridge and the theatre, and there was a lone Migrant Hawker patrolling the reeds around Lucy’s Mill Bridge. I thought the tufted ducks must have come in especially early, but having checked previous years’ photos I find that late September is actually pretty normal for the first arrivals. It still felt odd though – probably because we’re still enjoying a welcome Indian summer at the moment, and these are winter immigrants.

Whether this group will stay, or refuel and move on again, remains to be seen. They were noticeably restless today, but that’s pretty usual when they first arrive and have to find a place among the other water fowl. Nine is quite a good number – I’ve known smaller groups than this settle and stay – but while the weather is still good for overnight travelling, it’s perfectly possible that they’ll want to continue heading south.

You often notice with a group of tufted ducks that while most of them are rather interdependent – keeping an eye on each other at all times, and avoiding getting too far apart – there are usually one of two rugged individualists who like to strike out on their own. When I took this photo eight of the group were preening and snoozing in a tight group in the middle of the river, but this one was exploring close to the south bank, which allowed me to catch it on some extravagantly reflective water opposite the theatre.

I don’t claim any expertise in ducks – or anything else, to be honest – but based on the eyes being amber rather than yellow I’m fairly sure that this is a first winter adult, making its first winter migration at just a few months old. I’m also moderately confident that it’s a female, but it’s tricky to sex a tufted duck in either juvenile or eclipse plumage, so I’d rather not commit myself too strongly on that point at this stage.