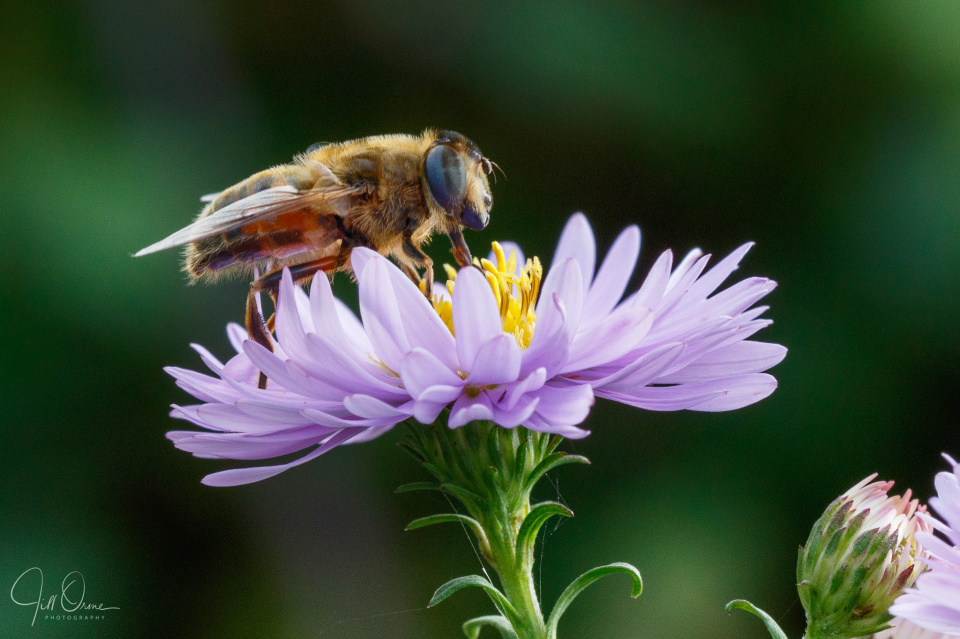 I debated with myself for some time this evening over which of these two photos to feature. The extra, taken with flash in the darkest corner of the wild garden, is much better-focused than the main image, but in the end the Michaelmas daisy won out. I think it’s quite interesting to see them alongside each other, because although the lighting and sharpness differ, the perspective is similar and they show two different but related species of hoverfly.

On the daisy is a female Eristalis tenax. She’s identifiable here by the double line of hairs running down the surface of her eye, making them appear faintly striped; and by her very heavy, curved, dark hind tibia, with bristly hairs that look like a bee’s pollen basket. If you could see the front of her face you’d also see that she has a broad dark vertical stripe running down the middle of it. 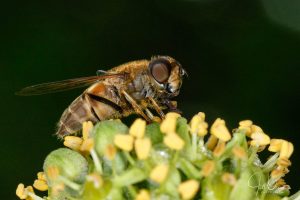 On the ivy is a female Eristalis pertinax. I usually identify this species by the fact that the front and middle tarsi are pale, which isn’t clear in this photo, but you can see that the hind tibia is two-tone, and that the central facial stripe is very narrow. Eristalis pertinax males also have quite pointed abdomens, and are notable for their entertaining habit of following you around, hovering nearby and watching whatever you’re doing. I have a suspicion that the females roll their eyes about this behaviour, considering it rather childish and a waste of good breeding time.

Other than a photo walk around the village and twenty minutes of interesting chat with my favourite neighbour, I spent much of the day at my desk, trying to catch up on a backlog of photo processing and administrative stuff. The highlight of the day was realising part way through the morning that my Facebook notifications were unusually high, and discovering that this was because one of my photos has been chosen for next year’s West Midlands Butterfly Conservation calendar. It’s always nice when you feel that you’re contributing to a worthwhile cause.