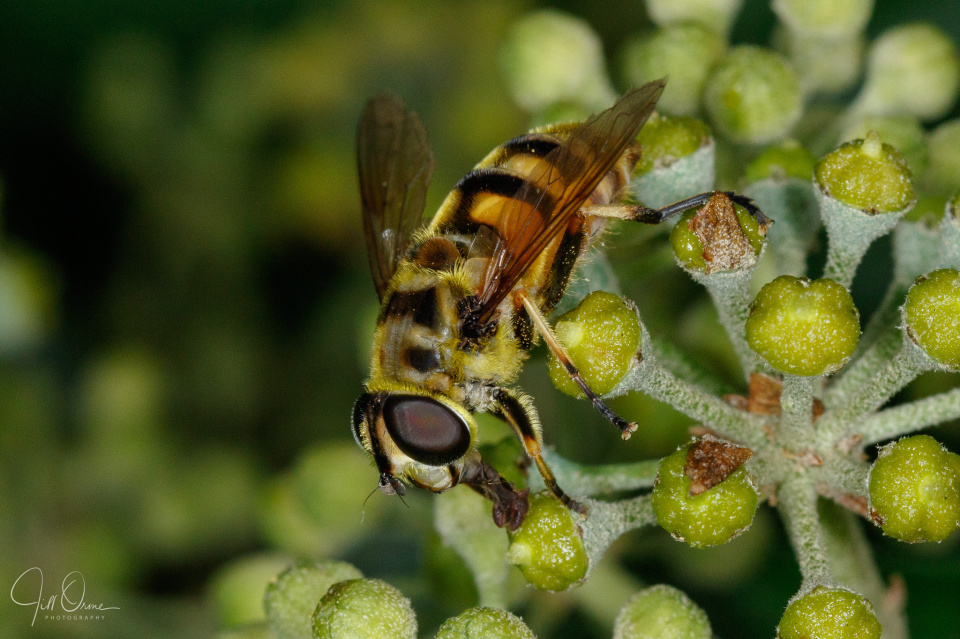 One of my favourite hoverflies to find on ivy flowers during the autumn is Myathropa florea: I love its striking colouring, and the bat-shaped smudge on the back of its thorax that gives the species its common name. Interestingly, I find that virtually all the specimens I see on ivy are females, whereas most of the individuals I find patrolling my garden are males.

Myathropa florea is quite a large hoverfly, and poorly-marked specimens are sometimes mistaken (by people like me) for Eristalis, which they superficially resemble. This is more likely to happen with the spring brood, which can be quite dull, than with summer individuals, which tend to have vivid, lemon-yellow hair on the thorax.

M. florea flies from April to October. It’s primarily a woodland species: the females prefer to lay their eggs in damp cavities in trees, though they will use other decaying matter such as compost too; and the males either hover in the air at around human head height, or sit on convenient surfaces at about the same distance from the ground, watching for the appearance of a female who might be willing to mate. When they’re flying they produce a particularly sharp and insistent buzzing noise, which makes them sound rather angry, and if they’re put to flight from a leaf or a fence post they tend to circle quite fast and then flump back down onto it with what seems like an irritable attitude. Females on the other hand are rather shy and skittish, so they need to be stalked with care even when they’re feeding.

M. florea adults will feed on a range of flowers, from spring blossom, through summer umbellifers, through to bramble and ivy flowers in the autumn. The rat-tailed larvae are believed to feed on bacteria in the decaying plant matter in which they develop.