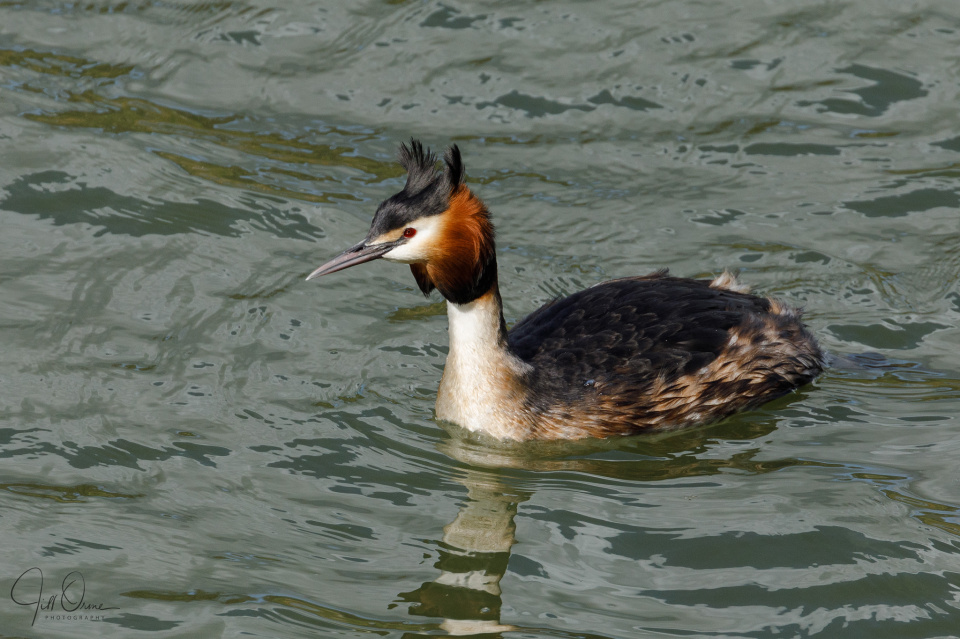 The better weather we were forecast duly arrived today, though it was pretty cold, and the wind was almost strong enough to lift you off your feet. Clouds were rolling through so quickly that the light changed by the minute, and though some of them brought rain showers, they were gone again so fast that they were never more than a minor annoyance. So I left R at home working on another video for his Richpicking project, and took myself off to Compton Verney, where the house has been closed for the duration of the Covid-19 crisis, but the park is still open to walkers. It lifted my spirits to spend time in such a lovely place, and I think it did R and me good to spend a few hours apart – we’re both highly self-sufficient, and not used to living in each other’s pockets as we’ve had to do this week.

I’d been hoping to photograph the two resident pairs of great crested grebes at Compton Verney, and I did eventually track them all down, though one pair are already sitting on a well-positioned nest in an isolated reed bed, and I only caught distant glimpses of them. It’s exciting to think that there may be grebe chicks around in a few weeks, and if the park is able to stay open I’ll pay regular visits from now on, in the hope of seeing some “humbugs” while they’re being carried around by their parents.

The other pair haven’t yet nested, though you’ll see if you check out my extra that they’re doing some practising as part of their pair bonding ritual. In that image, which was taken from a considerable distance because I didn’t want to risk disturbing them, the male is demonstrating to the admiring female how well he’ll protect the nest – including moving around it very carefully so as not to damage the eggs, which is always a hazard for these birds as they’re extremely clumsy out of the water. The female made a few fairly desultory forays to fetch vegetation to add to the nest platform, but they didn’t spend long at the site before swimming away together, which confirmed to me that the nest isn’t yet active. A great crested grebe lays her eggs over a period of several days, but incubation begins as soon as the first one is laid, with the pair taking shifts – one sitting on the eggs while the other exercises, hunts, and feeds. 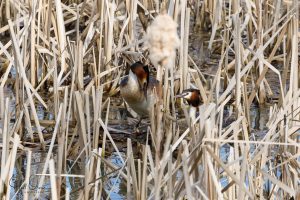 This is the female, who looks very similar to the male, though she’s a little smaller, and slightly paler around the “bumper”. I like the fact that she’s swimming towards the sun, which is nicely highlighting her breeding plumage, but has the wind behind her lifting her crest feathers. According to the Wildlife Trusts a great crested grebe’s russet head plumes are called a tippet, and it was the passion of C19th women for using these feathers on their hats, and the downy breast feathers (or “grebe-fur”) to line their muffs and wraps, that saw the species hunted to very brink of extinction in this country. The fact that they’re now relatively common again makes them a great conservation success story.

By the way, I’ve been pondering this use of the word “tippet”, which I’d only previously run across in Victorian novels, describing a little stole worn by women around the neck and shoulders. At first I couldn’t really see the connection, but the more I look at this photo the more I like the idea that those red feathers – which I’ve always thought of as a kind of page boy haircut – are in fact a fancy cape that she puts on to go out.