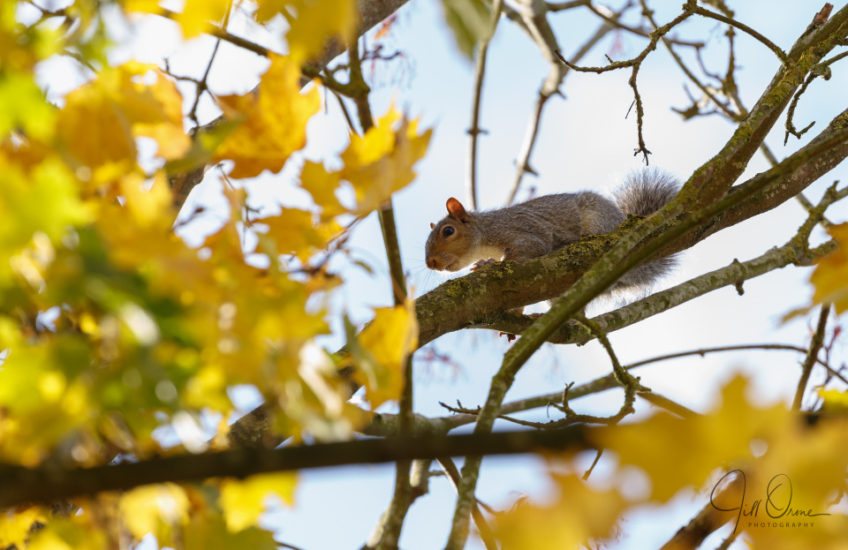 I was wandering down the garden on my way to photograph autumn leaves for today’s blip, when I surprised this squirrel. I was almost equally surprised and stopped in my tracks, at which point the squirrel set off quite slowly and seemed to tiptoe towards the nearest sycamore tree (presumably in the hope of not attracting my attention), and sidled round to the far side of the trunk. I took a couple of steps, and there was then an absolute flurry of movement, as it scampered up the trunk and began looking for a branch from which it could jump to the next tree, and I ran forward to try to get a shot before it could effect its escape.

I really didn’t expect to manage a photo, but I was lucky: it made the mistake of running out along a branch that pointed into the centre of the garden rather than towards another tree, and had to turn back to find another route. Seeing me quite close, it froze for a couple of seconds, which was enough time for the BZ to find focus, and for me to take a step to the side to find a clear sight line. I got three clear shots before it jumped to another branch, and then to one of the apple trees, and then to the weeping ash…. and after that I’m not sure where it went, but a quick look at the LED screen told me I had my photo for the day, so I left it in peace and went back to the house for a cup of tea.

I’m now off to watch Blue Planet II, which I’m sure will make me feel a lot less pleased with my own photographic efforts!