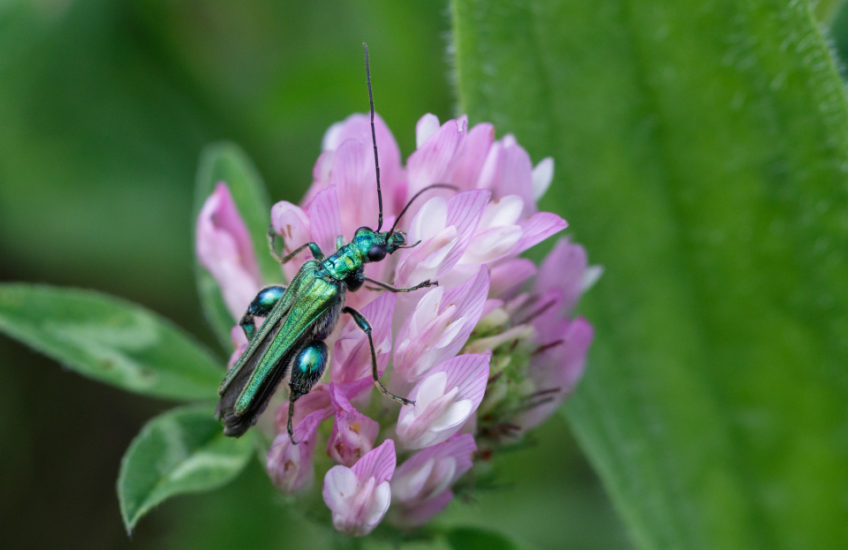 A photo walk around the village this afternoon netted quite a range of bees, but worryingly only two hoverflies and three butterflies. Looking back at my photos from this time last year, the area was teeming with bugs of all kinds, and I’m disappointed and slightly agitated that there are so few about at the moment. But I think the lack of rain through the spring must have had an effect: the field I tend to refer to as the butterfly meadow is still quite under-grown and lacking its usual range of wild flowers, and the bramble hedges are only just coming into bud.

What I did find in satisfying numbers were Thick-legged Flower Beetles (Oedemera nobilis), this one showing rather prettily against a pink clover flower. I’d forgotten since last summer how small they are – when the first one flew past me I thought it was a fly except that the movement was too fluttery, and having managed to track it to earth I was genuinely surprised to realise what it was. Once I had my eye in I spotted numerous individuals of both sexes: this is a male, as shown by the swollen rear legs, and to show you the difference the first extra today is a female. 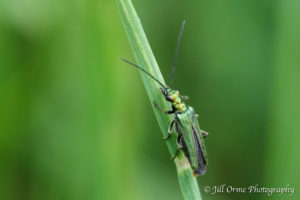 The second extra is, I think, some kind of fruit fly – possibly a Chaetorellia, though I’m guessing here because I’ve never encountered one before. When I first spotted it it was engaged in a stand-off with a Flower Beetle on another marguerite, both of them feeding and neither wanting to share; in the end it was the fly that backed down and moved to a different bloom. There’s something about the hairiness of flies that makes me squirm slightly, but I’m very taken with this one’s turquoise eyes and patterned wings. This flower head was shaded, so I was battling quite bad light, but I had the sense that under the right conditions the eyes would be iridescent. 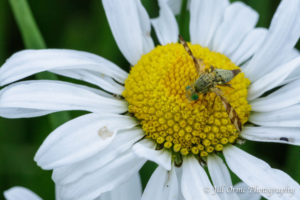