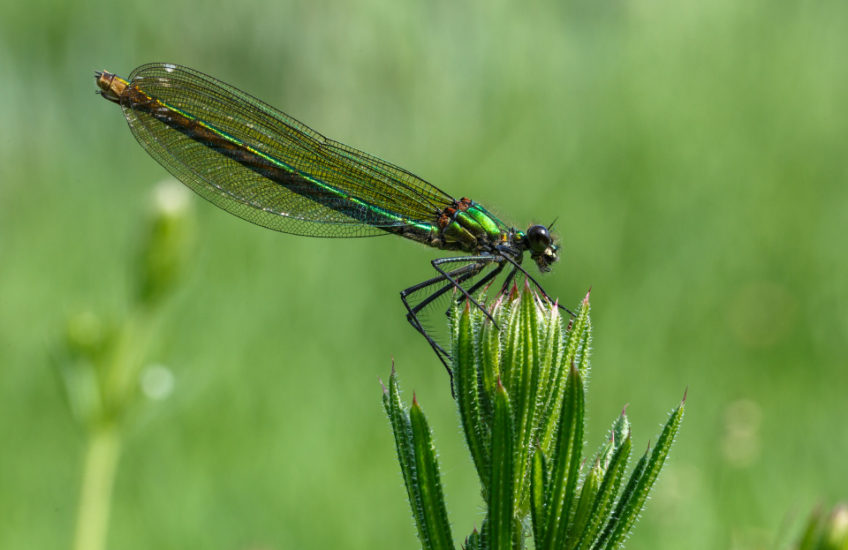 I have for you today two Banded Demoiselles (Calopteryx splendens): this is the female, and the extra shot is the male – though I could easily have posted them the other way round, and may yet swap them! 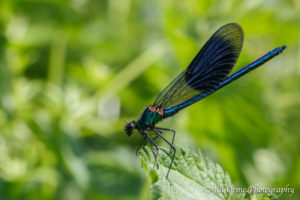 Today was my last day of having to be chauffeured around post-surgery: as of tomorrow the MX-5 and I will be zooming about all over the place (at least until the next time someone fails to notice us, and swipes us off the road). As it was a lovely day and he knew that I was raging to go on a dragon hunt, R sweetly drove me out to Hampton Wood on the other side of Stratford, a Warwickshire Wildlife Trust site with a large water meadow which, as I’d expected, was literally teeming with Banded Demoiselles.

Though it would be fair to say that R was less enchanted by the experience than I was, I know that he was surprised and impressed by the number of insects that flitted around us as we slowly walked the perimeter of the meadow, and I think it would be fair to say that he wasn’t unimpressed by the fact that I managed to photograph them – because they are extremely skittish. I had both cameras with me – the 7D with a long lens, and the 5D with a macro; obviously it was easier to get long lens shots without spooking the Demoiselles into flight, but I really wanted good quality macro images, and with care and patience I managed to get a few. I find that if you treat the whole thing as a game of Grandmother’s Footsteps, it helps you not to get frustrated that 95% of the insects at which you point the camera take off before you’ve even found focus; and when one of them does stay put it’s then sometimes possible to advance on it so slowly that it seems almost to become hypnotised – R said that in the end the lens hood was only inches away from this female, and I think that must be true because this shot is only slightly cropped.

Had I been on my own I would probably have stayed for hours and come home with hundreds of shots, but R’s presence saved me from myself, and after an hour or so we went back to the car and drove down into Stratford for lunch. Arriving home at about 2pm, we were walking along the north side of the house when we heard furious buzzing, and looked up to see scores of honey bees trying to find a way into the redundant chimney in which they used to nest, but which we had properly sealed a couple of years ago. Luckily we were able to find a local apiarist on line, and he came out very promptly and took a look at the problem, reassuring us that it looked like scouting bees rather than a swarm. He then sold us a spray of herbal mixture which he said acts as a honey bee repellent, and lent R some protective clothing to wear while climbing a ladder and spraying the mixture around the base of the chimney and the nearby soffit and fascia. The effect was remarkable, I must say: the bees immediately became quite agitated and moved away from the chimney – though they did hang around that part of the house, albeit in decreasing numbers, for several hours afterwards. We’ll have to monitor the situation over the next few days to be sure that they’ve given up on their old nest.