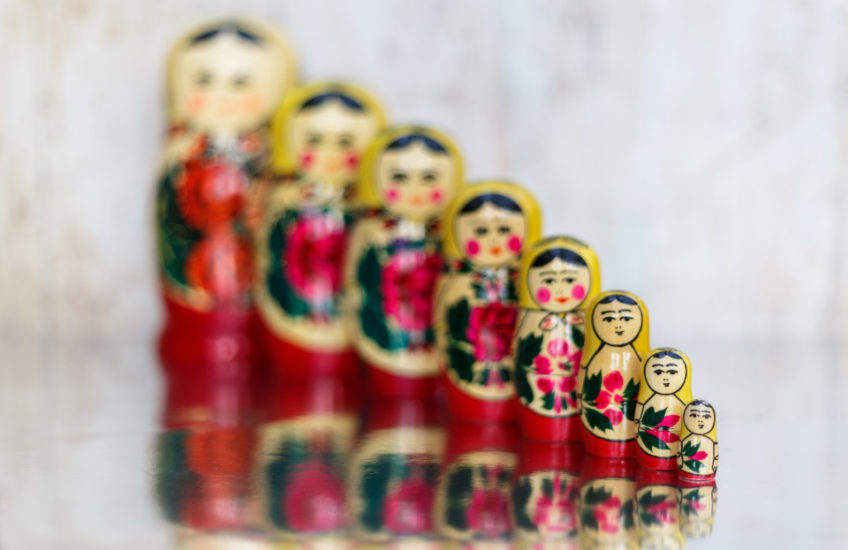 As a child of the Cold War, raised in the rural north of England, I was unprepared when I moved to London in my early twenties (almost a decade before perestroika) to find a Russian shop on Holborn. I was fascinated by the place, quite sure that it was staffed by spies, and as it sold unusual and reasonably cheap trinkets and was within easy walking distance of my office, I visited it regularly for lunch time browsing sessions. Among other things I bought (and still own) a pair of opera glasses and a rather nice stylized ceramic figure of a pointing dog, the latter bought almost as much for the window sign Sub-Standard Pointers as for the item itself: as the owner at the time of a very beautiful but emotionally fragile English Pointer I found the concept irresistible.

The Russian Shop also sold, of course, Matryoshkas, and I coveted them deeply, but as I was having to exist on the starvation wages paid to the lower ranks in the publishing industry they were quite out of my reach. According to this web site the original Russian nesting dolls consisted of eight pieces, but the Russian shop in London only sold odd-numbered dolls, starting with a five-piece nest and going up to sets with over thirty pieces; the prices began at about £20 if I remember correctly, and went up apparently exponentially as the size of the nest increased.

When Child One appeared on the scene (appropriately for this story, shortly after the fall of the Berlin Wall and the collapse of the Soviet Union) it wasn’t long before I started to feel that she ought to have a Matryoshka, and when she was about three years old I went to the Russian shop and bought her this one. It was an entirely ridiculous present for a small child, of course, and I’m really quite embarrassed about it now: the smallest figure is a choking hazard, though it’s fairly inaccessible because the larger ones are impossible for a small child to open, and therefore it could only be played with under strict parental supervision, and spent most of its time on a high shelf.

Child One now lives in Cardiff, where she’s unlikely to find herself choking on the Matryoshka baby because it still spends most of its time on a shelf here in Worcestershire – though I must stress that I haven’t appropriated it: she still uses the parental home as overflow storage for quite a lot of her belongings, including her Russian doll. Today though I thought that it might be fun to borrow it for some Tiny Tuesday selective focus practise – which it was, though I must say I went almost cross-eyed trying to cull and edit the shots, and had to resist a strong urge to book an appointment with the optician.