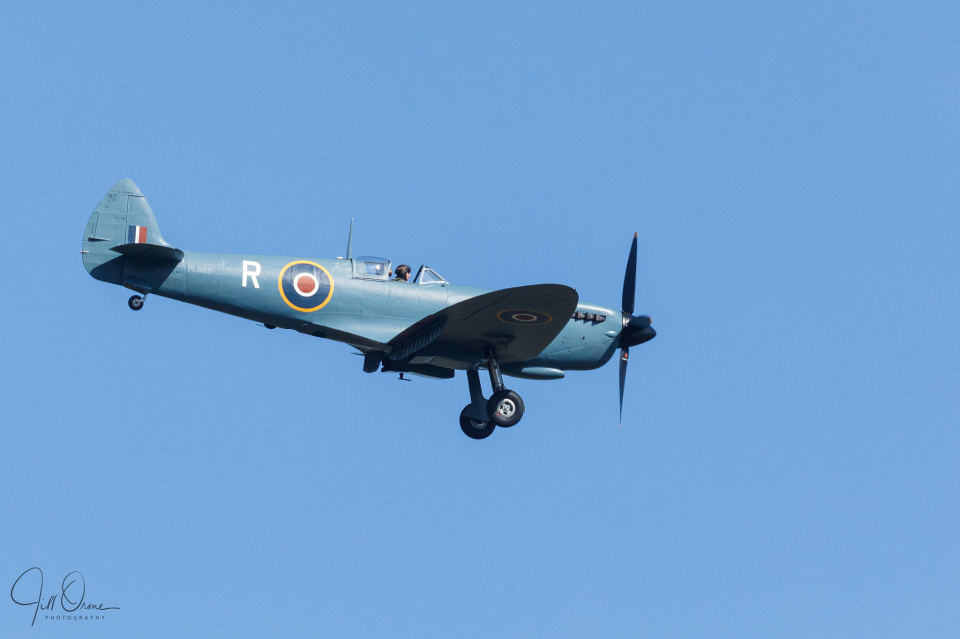 “That’s a big camera. What do you like to photograph?”

While R and I were walking around West Park at Charlecote this morning, admiring the herons and the very pregnant fallow does, conversation suddenly became increasingly difficult due to the approaching noise of an aeroplane. Planes fly over Charlecote all the time, because it’s very close to Wellesbourne Airfield, but most of them are little pleasure craft that sound like large lawnmowers; this was a deeper noise, and very much louder, and when the owner of the gravelly voice hove into view, we gawped at it in frank astonishment. My admiration for things with wings only barely stretches to the inanimate kind, but I was raised on war films, which played back-to-back on both the then-available television channels every Saturday and Sunday throughout the eighty or so years of my childhood, so even I was able to recognise a WWII fighter aircraft; and R – who’s a boy, obviously – correctly identified it as a Spitfire.

Luckily I was able to record the serial number, PL965, which made it the work of less than a minute to discover that this aeroplane was built in 1944 for high-altitude photoreconnaissance, and that after a chequered post-war history she’s now part of the Hangar 11 Collection, based in Kent. The fabulous noise she produces comes from her original Merlin 70 engine, which was refurbished and replaced in “Stella” back in 2010. I have no idea what she was doing in Warwickshire today, but I’m very pleased to have been standing in West Park when she flew overhead.

Back at home I went looking for other things with wings, and happily recorded a male Andrena bicolor, a 10-spot ladybird, and a box bug. Less amusingly, the only dark-edged bee-fly currently in the garden is still reacting to my attempts to photograph it like a Cabinet Minister spotting a press tog while emerging from an “anything goes” party hosted by the son of a retired KGB colonel: I was a good two metres away from it this afternoon, and standing fully upright, when I tried to secure a basic record shot, and I’d barely lifted the camera a centimetre when the bee-fly lifted off the celandine on which it had been feeding and made the leap into hyperspace. An hour of diligent searching failed to track it down again.

Bee-fly intransigence notwithstanding, I was feeling pretty pleased with myself when I walked back to the house, at which point the day came crashing down around me: R was standing in the kitchen, holding a positive lateral flow test. He and I have both been feeling fairly rough for the past few days, but both of us had been testing CV-negative, so we’d assumed that we were simply suffering from yet another grandchild-delivered cold. I was offered a PCR test by ZOE after reporting my symptoms to them, which I took and posted back at lunch time today, but I wasn’t expecting anything to come of that either, and having dropped the package in the post box I’d got on with my day and essentially dismissed the thought of Covid from my mind. Now though… I guess I can expect it to be positive. And even if it isn’t, I need to assume that I have the beastly disease too, after managing to avoid it for two years.

While I’m not even slightly happy about this unexpected development, I’m trying to look on the bright side. Which is that it’s forecast to be a lovely weekend, so it won’t be any hardship to be spending it at home in the garden.