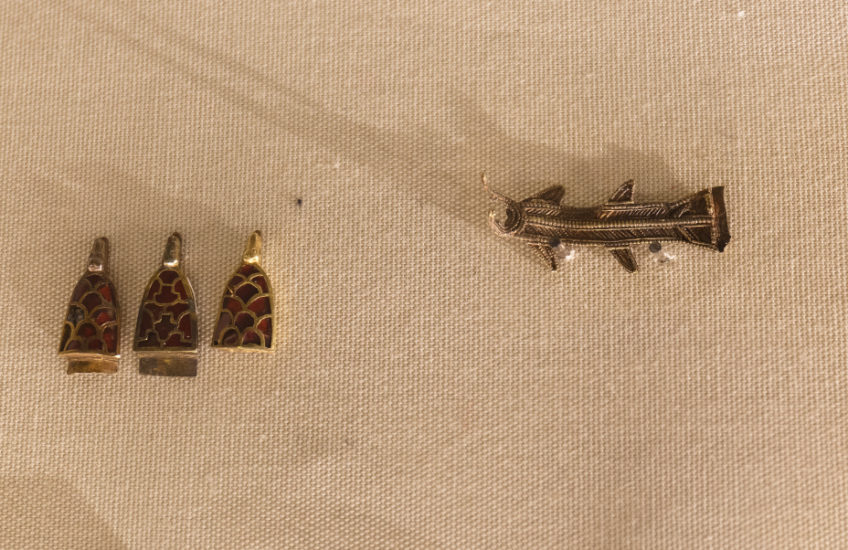 R and I spent the day in Birmingham; in the morning we went to the City Museum and Art Gallery to take a look at the Staffordshire Hoard, and then after lunch we did a little shopping. Much coffee was also drunk, and cake consumed – and if I’m honest, I’ve been feeling slightly offish since about mid-afternoon. But enough about me.

The Staffordshire Hoard, should you not be familiar with the story, is the largest collection of Anglo Saxon treasure ever discovered in this country. It was found in 2009 by a metal detectorist in a field near the Staffordshire village of Hammerwich, excavated by a company called Birmingham Archaeology, and following a successful public appeal for funds to keep it in the Midlands was bought jointly by Birmingham City Council and Stoke-on-Trent Council. Though when I say “excavated”, I’m not sure that there was actually much digging involved: although it had originally been buried, centuries of soil slippage had brought the Hoard close to the surface of the field, and ploughing had then distributed it through the top soil across an area of about 150m², allowing the archaeologists (with further input from the finder) to collect it up in the space of just four weeks. Over 4000 items and fragments of items were collected, including over 5kg of gold.

It’s believed that the Hoard was buried around the middle of the C7th AD, a period at which the kingdom of Mercia was in regular conflict with the neighbouring kingdoms of Northumbria and East Anglia – but it’s not possible to say exactly why or when the treasure was buried, or why its owners weren’t able to return for it. Fascinatingly though, most of the damage to the items wasn’t done by time or ploughing, but is historic, and assumed to have been perpetrated by those who then buried the Hoard – leading to speculation that it may have been battle loot. Certainly, when you look at a large piece of scrunched-up gold, originally a cross set with cabochon garnets and believed to have been the decoration on a Bible; or the pommel and hilt decorations from around ninety swords (from a time when only noblemen owned swords, which were so treasured that they were specifically included in their owners’ wills and handed on through families), it’s hard not to feel that some violent event was associated with the gathering-together and hiding of all these items.

The craftsmanship involved in some of the pieces is amazing. My main photo shows on the left three small weapon mounts, about 18mm long, made of gold and decorated with cloisonné-set garnets; and on the right a 3cm gold mount in the shape of a fish (probably a pike), decorated with filigree. A huge number of cut and polished garnets appear throughout the Hoard, and analysis has shown that some come from as far away as northern India.

I’ve included an extra which shows part of a display of items and associated fragments in their conservation receptacles. If you imagine 4000 pieces like these arriving covered in dirt, or sometimes encased with other items in large lumps of soil, you’ll have some idea of the huge task involved in cleaning, recording and cataloguing this treasure. I’ve always wished that I’d had the courage to follow my heart instead of other people’s advice when I was young, and trained as an archaeologist – but given the level of my loathing for housework, I very much doubt that I’d have been cut out to be a conservator. 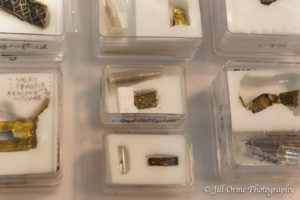 If the Dark Ages float your boat, I wholeheartedly recommend that you take a trip to see the Staffordshire Hoard. And if they don’t, Birmingham Museum and Art Gallery is a pretty cool place anyway, with an interesting range of museum collections and some good Pre-Raphaelite paintings.