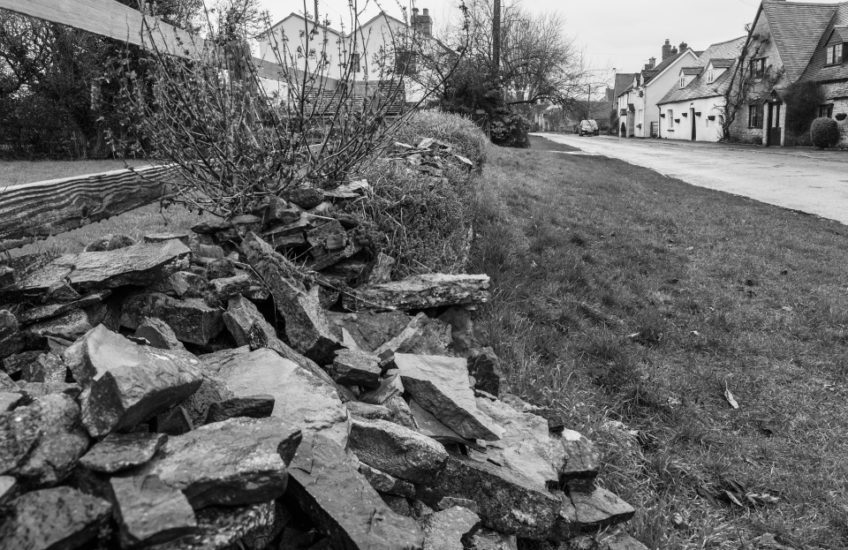 All my weather forecasts had said that it would rain in the morning, but then clear up, and that there would be periods of sunshine through this afternoon.

This was a blatant lie. FAKE NEWS!!!

So I sat at my desk like a superannuated Cat in the Hat character, staring moodily out of the window (and coughing, because I appear finally to have succumbed to The Virus), wondering what the hell I was going to photograph if my plan to go over to Chesterton Windmill for a wide angle shot proved unworkable. Eventually I gave up, donned waterproof gear, picked up a weather-sealed camera with a weather-sealed lens on it, and stomped off out into the downpour.

The neighbours probably thought I’d lost it this time. In which case they were pretty much right.

The only bits of foreground interest I could come up with in the time I was prepared to be outside were a couple of puddles and this collapsed dry stone wall (ha!), so I tried them all and then stomped off back inside – by now making a noise like La Dame aux Camélias. For each view that I took, I shot three frames (all hand-held), so as to get focus all the way through the final images. I was sitting at my desk, spluttering all over my iMac and blending sets of files in Photoshop, when I happened to glance out of the window and saw that it had stopped raining, and there was quite a nice sunset going on.

So, though this isn’t the most interesting bit of foreground interest you’re ever going to see, as a metaphor it works pretty well.

Thanks to hobbs for hosting. If you’re looking for a beautiful entry to this week’s challenge, try Freyjad’s view of Scammonden Water.