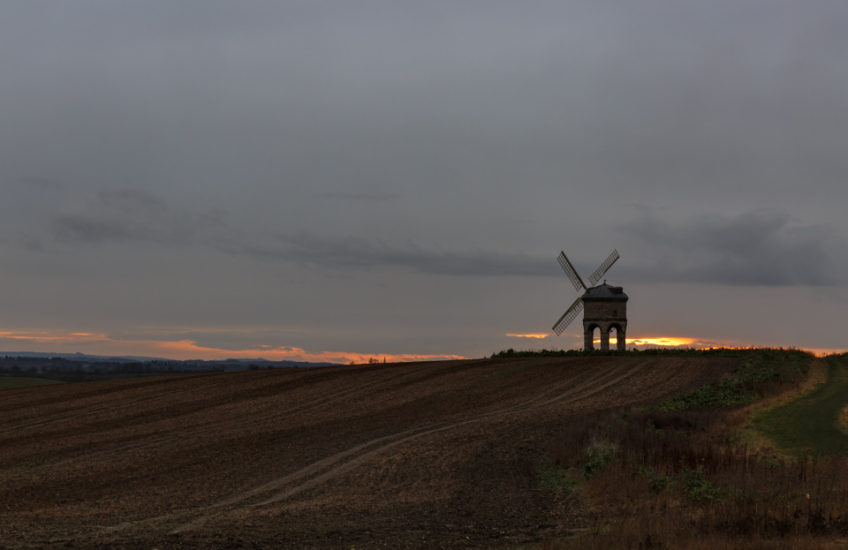 I decided to go to a photography workshop at Wellesbourne this afternoon. “Why?” said R, who had spent the morning listening to me alternately impersonating final-reel Doc Holliday and a large hedgehog. “I need to get a critical opinion on some potential shots for next week’s competition,” I said – knowing perfectly well that this wasn’t a good enough reason to be going out this ill. But I went anyway, spending most of the workshop with a scarf wrapped three times round my head to contain the germs, and coming away with the uncomfortable feeling that now I’d revealed my potential images I was probably going to have to choose different ones anyway.

I’d thought that I would probably stop in Stratford on the way home to get a photo, but as I was driving away I remembered yesterday’s aborted mission to photograph Chesterton Windmill, which is only a few miles away from Wellesbourne, and changed direction. At the time the weather was overcast but fine, but after a couple of miles it began to rain – and then the heavens opened and it sheeted down. I then remembered that I was wearing ordinary shoes rather than hiking boots… but I didn’t get where I am today by being sensible, so I ploughed on.

By the time I reached the Windmill the rain had eased a bit, but the approach was an absolute swamp, and within a few yards my shoes were soaked through. I also had to concentrate quite hard on not slipping and falling. I minced gingerly up the rise, took a couple of dozen photos (most of which were so covered in huge uneditable rain spots that they were unusable), and then slithered gracelessly back down again. By this time the sunset which had been faintly suggested earlier had started to develop, so I stopped and took wide shots every few yards – of which this is one.

I then had to drive home with cold feet in sodden shoes and socks, shaking with ague despite having the heater running full-blast. If this were a Georgian novel, the chill I would take from this escapade would be life-threatening, and Colonel Brandon would be pacing up and down outside my sick-room, frantic with worry; as it is, I don’t in all honesty feel very much better than the time I had what was said to be borderline pneumonia, and my current temperature of 100.1º is almost unheard-of for me.

Having done my best to elicit a load of sympathy that I know I don’t actually deserve, I’m off now to take drugs, and then retire to my bed with a hot water bottle. I may be there some time.