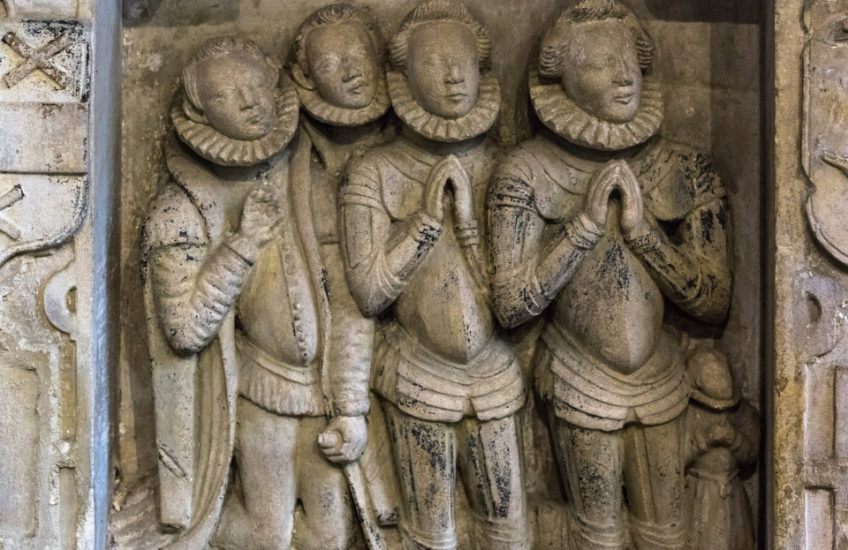 There were soprano and alto section rehearsals for the St John Passion in Chipping Campden Parish Church this morning, and while we were waiting for the sopranos to finish, another of the altos, J, who designs the Festival Chorus concert posters, came to chat to me about the fact that I had a large camera hanging round my neck. She asked if I would be prepared to take photos of some of the monuments and features in the church to illustrate future posters – and of course I said I’d be delighted. J then mentioned this to our choir master, who was enthusiastic about the idea and took me round the church to show me some of his favourite artefacts and decorative elements.

What an absolute treasure trove this church is! I was already aware of some of the larger tomb effigies, but I had never noticed this heavily-carved tomb before – probably because it lies behind the altar rail, and it would never have occurred to me that I could go into this part of the church if I hadn’t been taken there. Sir Thomas Smith was a friend of Henry VIII and the first Governor of the East India Company, as well as being Lord of the Manor of Campden, and when he died in 1593 a tomb was constructed for him which has not only a life-sized carved effigy of the occupant on the top, but a frieze running around the sides with likenesses of both of his wives and all thirteen of his children.

It was difficult to get an angle to photograph the women, but I’ve put three shots on Flickr, starting here; I especially like the fact that in the third of them two of the daughters seem to be peering around their mother. This is a group of the sons: I’m charmed by the fact that the two older ones have rather stylish quiffs, while the two younger both have jug ears. I suspect that the disproportionately tiny one might have died in childhood, but I don’t know that for sure. It seems to me that whoever carved these figures, though clearly not a great artist, had a genuine interest in the family, and at least a passing acquaintance with them: they look to me to be identifiable portraits rather than generic figures.

There are many other fascinating things in the church – far too many, in fact, for me to describe to you in a single blip. But I’ll be visiting again with different lenses (and a tripod and speedlight if I’m allowed to use them), so I’m sure that other treasures will appear in my journal in the future.