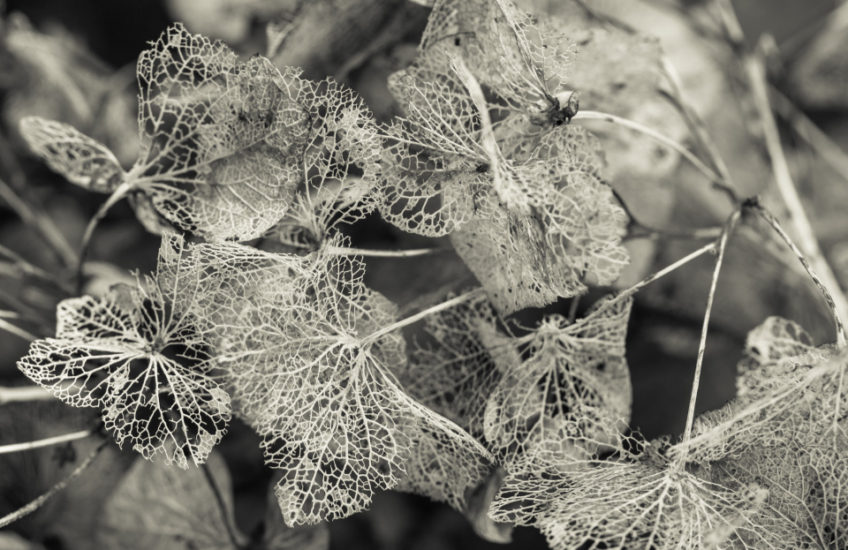 I’m still trying to think in mono. I took a few shots while R and I were walking Arthur this morning but none of them were speaking to me in mono, so I went for a wander round the garden when we got home and almost immediately saw this skeletal hydrangea. I’m not convinced it’s my best shot of the day, but my Valentine really likes it!

As we’ve had a very quiet day today and I don’t have much to witter about I thought I’d run a little mystery past you, which is quietly occupying quite a bit of our attention and conversation, but which we’ve so far been unable to solve.

It started a few days ago, when R told me that he had found an animal’s head in the far garden, down near the fence that divides us from the bank of the brook. It had some flesh on it but no fur, so wasn’t definitely identifiable, but from the size and shape R thought it might be a badger’s head. He had moved it to the far side of the fence to make sure that Arthur wouldn’t try to eat it – I wasn’t tempted to go and take a look myself, but told him that if it stayed in the undergrowth there long enough to be stripped down to the bone by insects I might retrieve the skull as an object of interest. Since then R has found some scraps of badger fur a little closer to the house, confirming the identification.

The first thing about this is that in sixteen years here neither of us has ever seen a sign of a badger before. There are definitely foxes living in the far gardens on this side of the brook (which until being parcelled out to the then-householders twenty years ago were farmland), but to the best of my knowledge no badgers. I know that they’re shy, but they live in family groups and it seems inconceivable that there could be a sett nearby without someone having noticed it. All the gardens are fenced and gated, so the wildlife that enters them has to fly, climb, jump, or dig underneath the fences or gates, and though there are fox runs I haven’t seen a tunnel big enough to make me think “badger”.

And then, how and why did its body and head come to be separate, and why was the head in our garden? I don’t know whether the fur that R found came from the head or the body, but I do know that a dead badger isn’t something you walk past without noticing it – the smell is so powerful that even dogs will give it a wide berth – so it seems likely that it was from the head, and that the rest of the badger is, or was, elsewhere.

One thought we came up with is that the poor thing was roadkill, and the head was carried away by something and then abandoned in our garden – but again, the something would have had to fly, climb, jump or tunnel, while encumbered with badger, and therefore it would have needed to be a large something. And this would still beg the question “why?”: why go to the trouble of carrying away something that clearly isn’t edible?

A less pleasant thought is that some kind of human activity might have been involved – there are people in this area who illegally snare for wildlife they consider to be vermin – but that still doesn’t solve the mystery of how and why the head alone wound up in our garden.

I haven’t had a chance yet to run the situation past any of the neighbours, but I’m going to have to talk to a few people about it – at the moment the problem is occupying a disproportionate amount of my mental energy. And meanwhile if you have any clever ideas about what might have happened, I’d be very glad to hear them!