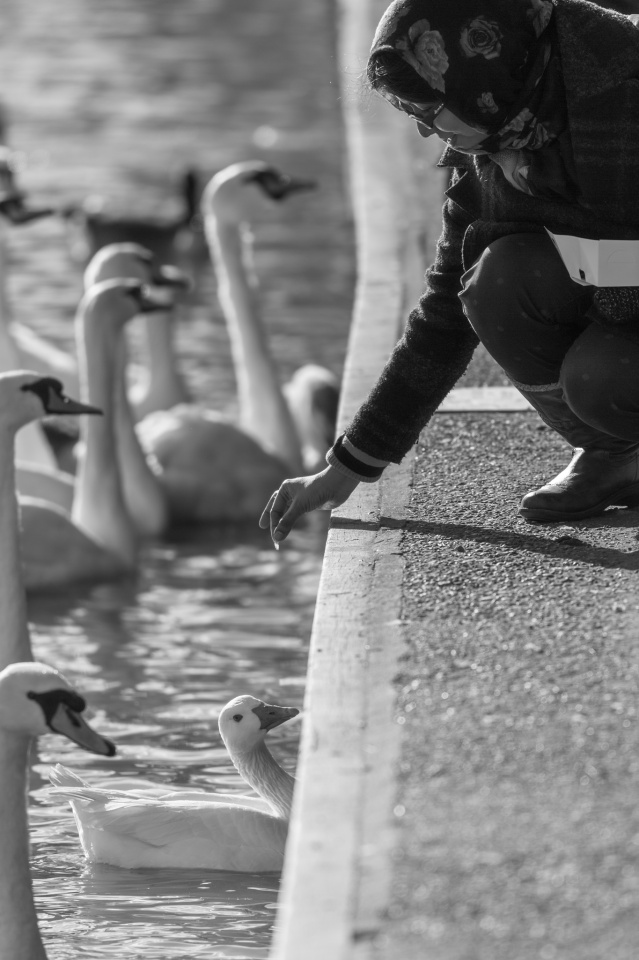 The participants on either side of the interface here are clearly at different levels in the hierarchy of needs, and to describe their relationship as love is stretching the term a bit: co-dependence would be probably closer to the truth. The birds are receiving food (of an inappropriate kind, I’ve no doubt, but let’s step around that) and by giving she is achieving personal fulfilment.

On the other hand, Einstein is quoted as having said, “A human being is a part of the whole, called by us the ‘Universe’, a part limited in time and space. He experiences himself, his thoughts and feelings, as something separate from the rest – a kind of optical delusion of his consciousness. This delusion is a kind of prison for us, restricting us to our personal desires and to affection for a few persons nearest to us. Our task must be to free ourselves from this prison by widening our circle of compassion to embrace all living creatures and the whole of nature in its beauty. Nobody is able to achieve this completely, but the striving for such achievement is in itself a part of the liberation and a foundation for inner security.” If you look at this act in those terms – especially given that she was attempting to share a small amount of pastry as fairly as possible around a large number of birds, so that none was left hungry – what she was doing was rather noble.

I took this at the Avon this morning, using the 400mm lens – the first time it’s been further away from the house than the back garden. I felt like a big show-off, wielding the enormous thing among a load of tourists with compacts, but I overcame my embarrassment over time. I got some nice photos, and a very effective biceps workout.

Back at home I decided to man up and go and take a look at the badger remains, but I’m no nearer to working out what happened: the head is too decomposed for it to be obvious how it was severed from the body. I phoned the District Council to check whether a dead badger in one’s garden is a notifiable event, but was told that although this used to be the case, DEFRA no longer want to be told about badger corpses. The woman I was speaking to didn’t say that this is because DEFRA itself is now slaughtering badgers wholesale in an almost certainly doomed attempt to stop them spreading TB – though if she had, I wouldn’t have contradicted her.