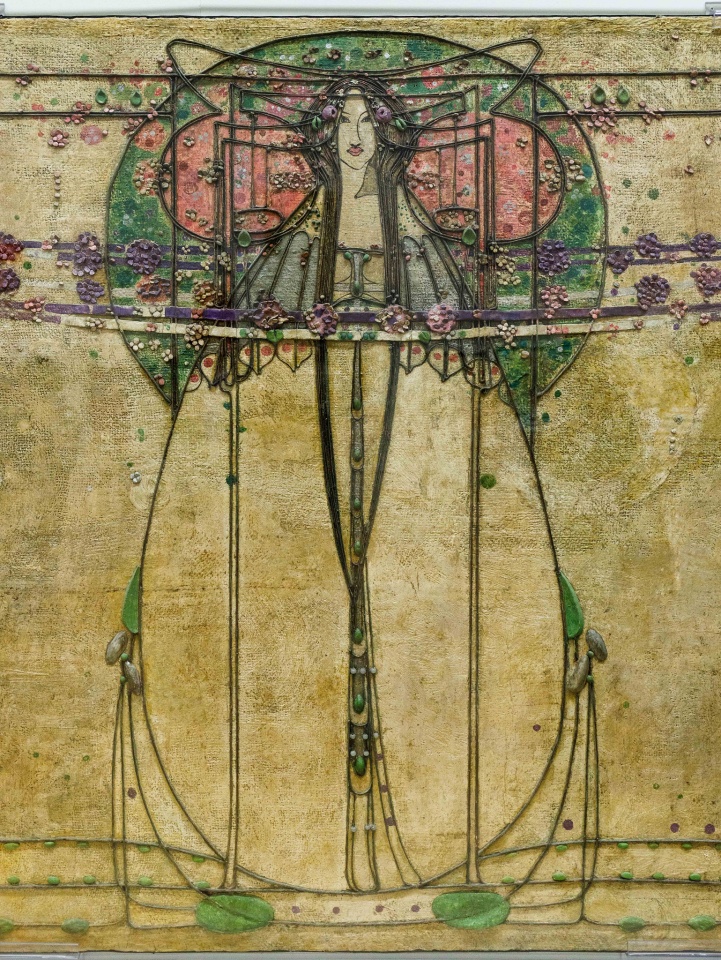 The reason R and I came to Liverpool was to see the exhibition Charles Rennie Mackintosh: Making the Glasgow Style at the Walker Art Gallery. In my case, we also came to see the red squirrels at Formby, but the weather this morning was so awful that I had to grumpily give up on that plan – even if the squirrels might come out to play in teeming rain, the chances of getting decent long lens shots in dark woodland were too low, and the prospect of getting drenched trying was too uninviting.

I enjoyed the Mackintosh exhibition (though I thought it suffered from a surfeit of architectural drawings), but the most interesting thing for me was to see the interplay of the work of Mackintosh, his friend Herbert McNair, and the Macdonald sisters Margaret and Frances, whom they respectively married: the collaboration of these four people was central to the development of the branch of art nouveau known as the Glasgow Style. This is the central section of a gesso panel called The May Queen, which formed part of the decorative scheme Margaret Macdonald Mackintosh created for Miss Cranston’s Ingram Street Tearooms; at the end of August, when the Liverpool exhibition closes, it will go home to Scotland, where it’s usually displayed in the Kelvingrove Museum.

After lunch we walked a few yards down the hill from the Walker to the World Museum, and saw the Astronomy Photographer of the Year exhibition, which is very well worth a visit, should you find yourself in Liverpool with a squirrelless afternoon to fill. I always check out the technical notes alongside the photos in exhibitions like this, and some of the techniques and equipment detailed by photos of distant galaxies or nebulae were completely beyond my understanding – but the photos were fascinating anyway. Most of the ones I liked best, though, were the images taken with fairly standard equipment, showing the interface between earth and space, often with people included in the frame. The image Transport the Soul by Brad Goldpaint was the overall winner of the competition, and it’s so beautiful that I found it hard to walk away from it to look at other things. All the winners can be found on this page of the Royal Museums Greenwich site.

This evening Child Two came over the Pennines (by train, to his fusspot mother’s relief) to have dinner with his Ageds, and collect from us some things he left behind in Wales after L’s wedding. We had a lovely evening, topping off a successful day.